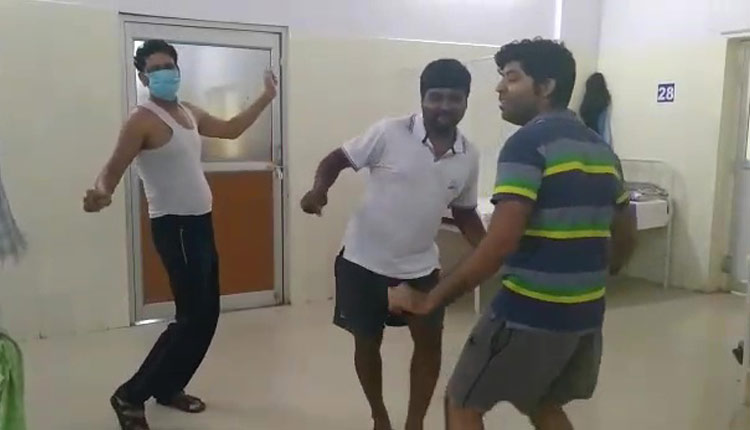 R Ramesh Kumar must be wondering at the sheer injustice of it all!

The contrast could not have been starker. A doctor at the AIIMS hospital in Bhubaneshwar gets feted on social media and even earns a five-column ‘hanger’ on the front page of leading English daily ‘The Times of India’ for grooving to the beats of the 1980s hit number ‘Muqabla’ while on duty and fully dressed in PPE. “I was just trying to relieve the stress,” says the young doctor, suddenly finding himself in the spotlight after a 3-minute video of his impromptu dance went viral on social media. But Ramesh, a Grade-II employee of public sector behemoth Nalco posted at Damanjodi, got the shock of life when he was handed a suspension letter by his employer for doing exactly what the good doctor at AIIMS had done: relieving stress through dance! What must have made it even more painful for Ramesh was the fact that he received the suspension order when he had just made a triumphant return from the COVID hospital at Jeypore after winning the battle against the deadly Coronavirus.

These are certainly trying, stressful times for everyone. Doctors, patients and laymen all are stressed due to the all-pervasive panic caused by rapidly burgeoning COVID-19 cases. The need for ways to de-stress, therefore, was never greater than it is now. And doctors and psychologists the world over are unanimous in their view that dancing is one of the best ways to relieve stress. In the video that has gone viral, Ramesh is seen wearing a mask and maintaining social distance from his two dancing partners, a fellow COVID patient and his teenage son. So, what exactly was he being punished for? Beating the Coronavirus? Indulging in an innocent exercise to de-stress? Or making the video viral on social media? Which exact rules was he flouting in doing what he did?

The official Nalco release on his suspension itself makes it clear that he was not violating the COVID-19 Rules framed by the state government. In fact, there is no mention of these rules in the release at all. What it says instead is this: “You have committed certain acts of serious misconduct (emphasis mine) during your stay at COVID hospital from July 5 to 15, 2020 for your treatment and it is not considered desirable that you should remain on duty and enter the work premises. Accordingly, as per the provisions of Order No 27 (B) (ii) of the Certified Standing Orders of the Company, you are placed under suspension with immediate effect.” This makes it clear that Ramesh was not being punished for violating any COVID-19 rules but for allegedly flouting some company rules. Since it is highly unlikely that NALCO has rules in place on how an employee should behave or not behave when admitted to a COVID hospital, it appears that Ramesh was booked on flimsy grounds. A little inquiry by this columnist revealed that there was no mention of a ban on dancing in hospitals in the COVID-19 rules of the state government. And what ‘serious misconduct’ does the order talk about? Shaking a leg or two as a way to de-stress?

If what Ramesh did constitutes ‘serious misconduct’, shouldn’t the AIIMS doctor also be punished for the same offence by the same reckoning? Why is he being feted while Ramesh is left carrying the can for the same mistake? We cannot have different standards for different people, can we? Nor can we make an exception in the case of Sourav Panigrahi just because he is a doctor, can we? This argument, however, is not intended to put the doctor on the dock but to highlight the varying standards applied by authorities while applying the so-called ‘rules’. In fact, the column salutes the AIIMS doctor as much as it does Ramesh for not being overawed by the grim situation and doing something that takes a lot of courage and positive thinking to do.

As the weeks and months go by, it is becoming increasingly clear that the Corona pandemic has provided a heaven-sent opportunity to authorities of all sorts to show the people who is the boss. In the first few days of the lockdown in March, this tendency to browbeat the citizenry into submission was seen in policemen gleefully wielding the lathi and even making people crawl, do sit-ups and similar kinds of nonsense. Now, it is evident in whimsical rule-making – the inexplicable weekend shutdown in 11 districts, for instance – and curtailment of all kinds of personal liberties. To cite just one example, the new guidelines issued by the Commissionerate Police after the fresh round of lockdown imposed in four districts and Rourkela Municipal Corporation since Friday night apparently bars citizens from going out on evening walks even within their own colony! This is as blatant an encroachment into the personal space of citizens as one can think of. And pray, what do you have to show for all the restrictions imposed on citizens since March other than an ever-burgeoning number of positive cases?

You cannot keep people, who have already endured over four months of lockdowns, shutdowns, night curfews and whatnot, confined to their homes 24X7 for weeks and months on end just because there is a virus roaming around looking for potential victims. This, in this writer’s view, is a violation of human rights. It’s high time the authorities, the government, in particular, realised this and withdrew all such draconian rules.

Personal liberties cannot be sacrificed at the altar of COVID-19!!