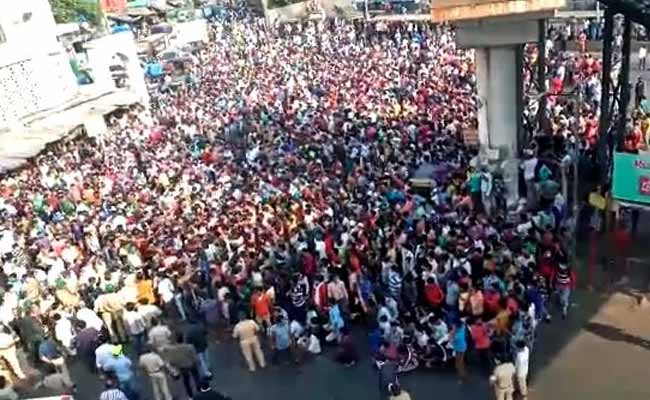 At a time when India – and indeed the whole world – is fighting an all-conquering enemy variously called Corona, nCorona and COVID-19, one would have thought the ‘nation’ would sink its differences and unite like it invariably does in times of War – and, of course, cricket. And this war is bigger than any India has fought on its eastern and western fronts since independence, the enemy more powerful than the greatest power on earth and the odds stacked more heavily against the nation than in any previous war. Thus, there is an even greater need for national unity and resolve now than ever before.

But unfortunately, that is not quite the way things have panned out. It is a sign of our times that the ‘virus’ of communalism, deadlier than even COVID-19, which has already led to one vivisection of the nation and is already threatening a second, has refused to take a back seat, at least temporarily, to allow the difficult War on Corona to be fought decisively and effectively. The rot has clearly gone too deep into the veins of the ‘nation’!

On the one hand, there is the Hindutva brigade, which sees a Muslim conspiracy in every tragedy, every breakdown in law and order and every violation of the lockdown norms. Everything, from the large gathering seen in Delhi at the start of Lockdown 1.0 to the equally large gathering at the Bandra railway station in Mumbai after the start of Lockdown 2.0 the other day, is attributed to Muslim designs to foil the War on Corona. Applying the ‘litmus test’ popularized by Prime Minister Narendra Modi during the election campaign in Jharkhand at the height of the anti-CAA agitation, the Hindutvawallahs can find out in next to no time the religious identity of the ‘trouble-makers’ from what they wear! A new term ‘bio jihad’ has entered public discourse, courtesy the tirelessly working vocab factory of Hindutva churning out terms by the dozen depicting Muslims as evil incarnate and enemies of the world. They would have us believe that the state that India finds itself in the War on Corona is solely, entirely and exclusively due to the Tableeghi Jamaat conference held in Nizamuddin in the middle of March. Citing a video by Maulana Saad, they have described the gathering as an exercise in bio-jihad and those who participated in it as bio jihadis, who have fanned out across the country to launch biological warfare on the majority Hindus! They have not allowed the fact that leading Muslim religious leaders and scholars have condemned the gathering and appealed to all Muslims to follow the lockdown restrictions strictly to ‘derail’ the narrative they are hell-bent on pushing. The extent to which such propaganda has ‘infected’ the mind of the average Hindu came home to me in all its starkness when a friend of 35 years, who is not a Hindutva fanatic by any stretch of imagination, remarked the other day; “We cannot afford to have these devils on our soil anymore.” I did not dare ask him what he would like to be done to these ‘devils’ for fear of hearing something worse and more unpalatable!

On the other hand, there are those who are equally hell-bent on giving the Jamaatis a clean chit and making light of its contribution to the weakening of the War on Corona and overall deterioration of the situation in the country, pointing to similar gatherings, though much smaller in size, of Hindus, to underplay the role that the Jamaat has played. They would lambast the Hindutva brigade day in and day out for seeing everything in communal colours, but fail to realize that they themselves are guilty of the same sin they accuse the other side of!

Two contrasting cases, from two different corners of the country, will illustrate the point I am trying to make. Both the Union government and the Arvind Kejriwal governments in Delhi have been soundly pilloried for giving out the number of cases resulting out of the Jamaat conference separately in their daily briefings to the media, alleging that it was motivated by communal considerations and designed to paint all Muslims as villains! [The Delhi government, in fact, had to stop referring to the Jamaat and started using the term ‘special operation cases’ (whatever that means) to describe them instead following a directive of the Minorities Commission.] They had no time or inclination to pay attention to the fact that the Jamaatis constitute a minuscule percentage of the total Muslim population in the country and most credible Muslim leaders had, in fact, condemned them for making an already difficult situation even more difficult. For the life of me, I can’t really understand what purpose would have been served by keeping the identity of the Jamaatis under wraps. If anything, the revelation served a definite purpose: that of warning those who had attended the ill-fated conference and those who had come in contact with them since then about the dangers to their own lives and that of others in the area and encouraged them to opt for voluntary quarantine. [That many of them did not heed the advice is a different matter. But there was nothing ‘Muslim’ about this fear of coming out into the open. There are any number of Hindus too who have done the same!]

Closer home, the Naveen Patnaik government has chosen to go to absurd lengths to hide the fact the vast majority of positive cases and those on quarantine in the state had their origins in the Jamaat conference in March. Up to 40 out of the 60 positive cases found in the state so far belong to this category. The government’s intention in doing so – making sure that there is no communal flare up due to this – is, of course, unexceptionable. Any responsible government would do that. But while doing so, it has obviously not thought enough about the larger damage it has caused by leaving the field wide open for rumours, innuendo and worse. Does the government really believe [people at large don’t know what it wants to hide? Talk to anyone in Bhubaneswar, the ‘hotspot’, and you will find out the answer. The government has unwittingly given the game away by revealing the travel histories of those who have tested positive while keeping their identities secret! In any case, it was preposterous for the Naveen Patnaik government to think that Hindus would embark on a Muslim killing spree at a time when they are themselves under lockdown and their very lives are at stake. Having ruled the state for 20 years now, it should have had greater respect for the syncretic nature of Odisha’s tradition, which has refused to allow the ‘virus’ of communalism to enter the state, even as people in other states are getting ‘infected’ by it!

If the friend’s comment cited above is anything to go by, the decision not to reveal or trace the origins of the Jamaat related cases has only served the exact opposite purpose of what it intended!

SSC defers examination dates till May 3