Swarms Of Locusts Seen In Several Parts Of Gurugram 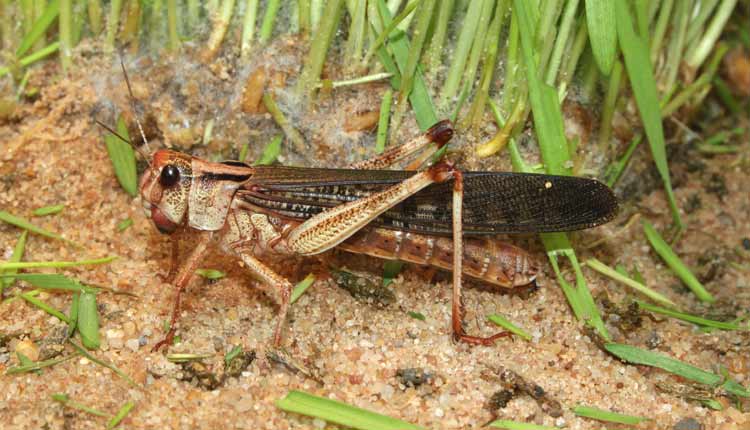 Gurugram: Swarms of locusts were reported in several parts of Gurugram district on Saturday. Locusts were seen in Rajendra Park of sector 5, Surat Nagar, Dhanwapur, Palam Vihar, Maruti factory in sector 18, Sector 17 DLF phase 1 and many other places in old and new Gurugram.

Residents of Gurugram were surprised due to the sudden attack of locusts around 11 a.m. However, the district administration has claimed that it had issued guidelines for residents, urging them to stay indoors and make noises to ward them off.

Residents used mikes, and loudspeakers to keep locusts away from their homes.

Gurugram district administration is assessing the damage due to the locusts’ attack.

Locusts, however, crossed the city in one hour and headed towards South Delhi.

Three locust swarms were spotted in the national capital and adjoining areas of Haryana and Uttar Pradesh on Saturday, following which local administrations issued advisory to deal with the menace.

Locust swarms were seen in South and West Delhi along with Gurugram, Faridabad and Palwal, Rewari and Jhajjar in Haryana.

Locusts eat up leaves and the tender tissues of plants, therefore, kharif crops are under threat, said an agricultural scientist.

Locust swarms were seen in the satellite city of Gurugram in the morning which entered Haryana from Rajasthan and were moving towards Palwal, said Dr. K.L. Gurjar, Deputy Director (Plant Pathology), Directorate of Plant Protection, Quarantine& Storage, Faridabad.

Locust swarm was noticed in Jhunjhunu (Rajasthan) on June 26, 2020 and control teams were deployed to eliminate the locusts, said Union Agriculture Ministry in a statement.

The leftover locusts regrouped and reached Rewari in Haryana on Friday evening where control operations were undertaken, said the statement.

According to Agriculture Ministry, all the groups of locust swarms are being tracked by teams of the State Agriculture Departments of Rajasthan, Haryana and UP, local administrations and officials of the Central Locust Warning Organization, and control operations are underway. More control teams from Rajasthan have been moved to Haryana and UP to help in the locust control operations being carried out in these two states.

The locusts keep flying during day time and settle down only after dark in the evening. Ground control teams are constantly tracking them and will undertake major control operations once they settle down. Control teams in UP have been alerted for this, said the statement.

The locust control operations are also being carried out in Rajasthan, Gujarat and Madhya Pradesh with the cooperation and coordination of the State Agricultural Departments, local administration and Border Security Force (BSF).

In May, India battled a devastating desert locust outbreak. The crop-destroying swarms first attacked Rajasthan and then spread to Punjab, Gujarat, Maharashtra and Madhya Pradesh.

According to experts, broadly four species of locusts are found in India desert locust, migratory locust, Bombay locust and tree locust. The desert locust is considered the most destructive.

It multiplies very rapidly and is capable of covering 150 kilometres in a day.

This insect, a type of grasshopper, can eat more than its body weight. One square kilometre of locust swarm containing around 40 million locusts can in a day eat as much food as 35,000 people.

Experts blame the growing menace of desert locusts on climate change. They say breeding of locusts is directly related to soil moisture and food availability.

Galwan Clash A ‘Huge Mistake’ By China, Will Have To Pay A Heavy Price: Experts