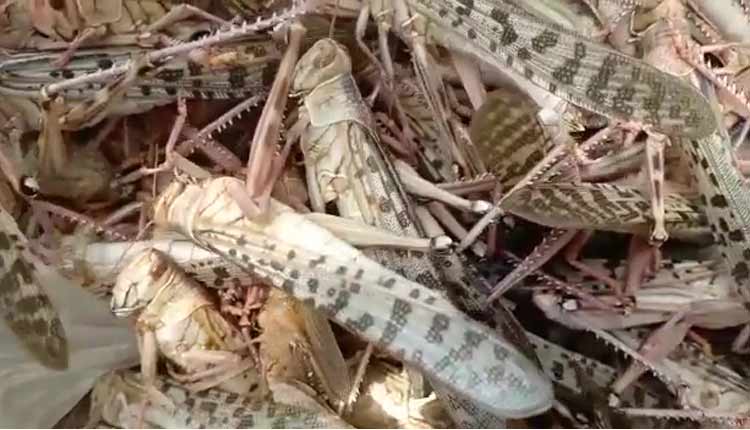 Bhubaneswar: After a brief lull, the fear of possible desert locust attack has again gripped the farmers in some regions of Odisha bordering with Chhattisgarh following reports of a fresh swarm entering the neighbour State.

According to reports, swarm of locusts from Madhya Pradesh have entered Bharatpur area of Koriya district in Chhattisgarh. Earlier on June 1, the swarms had entered the same area and subsequently returned to Madhya Pradesh.

The swarms have reportedly dealt extensive damage to crops in Chhati panchayat of Bharatpur block in Chhattisgarh. The Koriya district administration and local agriculture authorities have begun controlling measures to chase away the migratory pests.

“Following reports of locust incursion in Bharatpur area, we brought fire fighters and spraying machines. Whenever we get reports on movement of locusts, the fire fighters spray pesticide to ward off them. We are also creating smokes which help in controlling the locusts,” said Sekhar Golwalkar, district commandant of locust enforcement team, Koriya.

On the situation, Gulab Kamro, MLA of Bharatpur said, “Scientists and agriculture department employees are monitoring the situation in the region. Last time we had driven away a swarm of locusts and we are hopeful that they can be controlled this time too.”

Meanwhile, panic gripped the farmers in Sundergarh who fear that the swarm may head towards their region as the district is just 320 kilometre away from Koriya.

Speaking about the reports on the movement of the locusts in Chhattisgarh, SK Vashishth, special secretary of agriculture and farmers said, “We are having a watch on the situation. While vulnerable districts were alerted earlier, now we again asked the districts bordering Chhattisgarh to remain alert.”

“We had also sensitised farmers in the first phase. It is a joint efforts by the central government, state government and local administration to counter the threat,” he said.