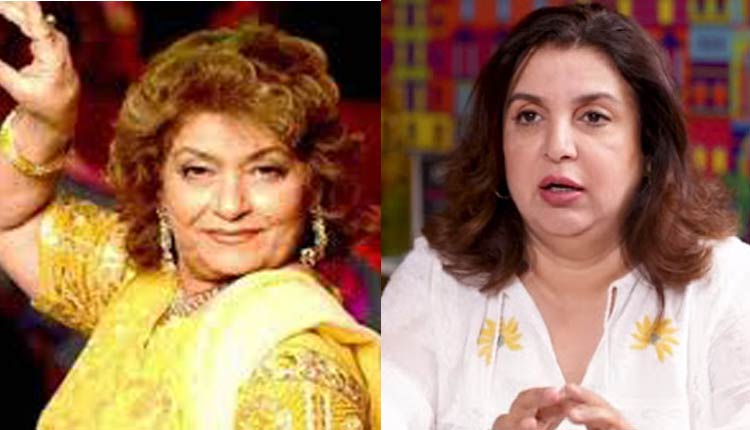 Bollywood lost a great choreographer as Saroj Khan breathed her last on July 3. Almost all the Bollywood celebrities had something good to say about her with big names like Madhuri Dixit, Shah Rukh Khan, Amitabh Bachchan and Kangana Ranaut appreciating her body of work. But there was a time when this three-time National Award winner felt humiliated and that too on national television. The death of Sushant Singh Rajput has triggered a continuous debate on nepotism and how it demoralizes talented people from outside the industry.

There was a time when even a legend like Saroj Khan was targeted and mimicked leaving her distressed.

Healthy competition is a must in every profession so that experiments and innovations are encouraged. But if your competitor uses famous platforms to take a jibe at you in front of a national audience then it is sure to affect someone of the stature of Saroj Khan. According to reports, the ace choreographer was highly unhappy with the way the famous director and choreographer Farah Khan targeted her twice.

During one of the episodes of Comedy Nights With Kapil, the famous comedian Kiku Sharda took his trademark jibe on Sarojji when Farah Khan was on the show for the promotion of Happy New Year. Kiku Sharda continued the broad take off on Saroj Khan in the movie Happy New Year which left the famous choreographer irritated.

In one of the interviews, the Hawa Hawai choreographer coolly asked, “I want all rational media-persons to ask a question on my behalf: what did Farah Khan get by getting a comedian to mimic me on Kapil Sharma’s show, and then in her film? Kyon mere peeche pade huey ho? Shame on Farah, Kiku Sharda, and Kapil Sharma for this kind of behaviour. What has Kapil Sharma got to do with me? Why is he part of this?”

Saroj Khan Was Not On Good Terms With Shah Rukh Khan

Even though Shah Rukh Khan has come out with his condolence message on social media after Saroj Khan passed away, he did not have amicable relations with the famous choreographer. The Dhak Dhak choreographer had clearly stated, “

Happy New Year is produced by Shah Rukh Khan. We parted ways during Baazigar when an incident happened during a schedule in Mauritius. Since then I’ve never went to him asking for work…I’ve never gone to anyone’s office to ask for work in my entire life.”

Time and again Madhuri Dixit has credited Sarojji for her success in Hindi movies but without any Godfather in the later years as the youngsters took over, the famous choreographer was neglected and did not receive the due respect that she deserved.