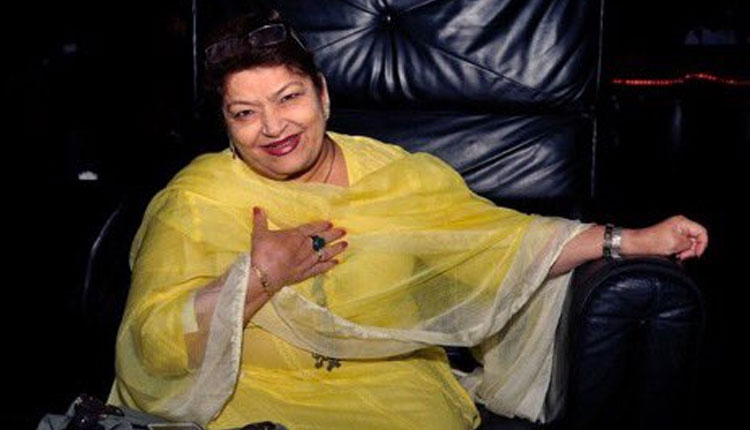 Khan was diabetic and had complained of breathing last month, following which she was admitted to Mumbai’s Guru Nanak Hospital. Over the past weeks, she had been suffering from multiple health issues, though she had test negative for Covid-19. She breathed her last at around 1.30 am today.

The last rites were performed at Malad burial ground. Few members of her family were allowed at the burial owing to social distancing norms.

Khan won the National Award thrice in her lifetime. In 2003, she received the honour for the song “Dola re dola” in “Devdas, picturised on Madhuri Dixit and Aishwarya Rai-Bachchan. In 2006, she was a recipient of the award for all the songs she choreographed in the Tamil film, “Sringaram”. In 2008, she won the award for the song “Yeh ishq haaye” filmed on Kareena Kapoor in “Jab We Met”.

One of the most prolific choreographers of the Hindi film industry, Khan, fondly called Masterji in Bollywood, had called the shots in over 2000 songs spanning over four decades.

Although Khan started out in the early seventies, she really became a household name in the mid to late eighties, first directing some memorable dances for Sridevi and then Madhuri Dixit, the reigning superstars of the era.

Saroj Khan started out choreographing with the 1974 film, “Geeta Mera Naam “. She directed songs for the Tamil film “Thai Veedu” in 1983 and also worked in Subhash Ghai’s superhit “Hero” the same year.

It was the 1986 film, “Nagina” that made her a household name. Sridevi‘s iconic dance “Main naagin tu sapera” in that film continues to be a popular number even today.

Her choreography for Sridevi the next year in Mr India, particularly the song “Hawaa hawaai” then scaled popularity.

Khan has also given Madhuri Dixit some of her most iconic hits including “Ek do teen” (“Tezaab”), and “Dhak dhak” (“Beta”) among numerous others.

Lately, Khan has been selective with signing new projects. Her recent works include choreographing Kangana Ranaut in “Manikarnika” last year and “Tanu Weds Manu Returns” in 2015.

Khan, born in 1948, started out in films at the age of three as a child artiste before a stint as a back-up dancer in the fifties. She is survived by her husband, son and two daughters.

Meanwhile, condolences poured in following the demise of the veteran choreographer.

I’m devastated by the loss of my friend and guru, Saroj Khan. Will always be grateful for her work in helping me reach my full potential in dance. The world has lost an amazingly talented person. I will miss you💔 My sincere condolences to the family. #RIPSarojji

Rest in peace Sarojji.. u were an inspiration to many, myself included. Thank you for the songs🙏🏻 #SarojKhan

Woke up to the sad news that legendary choreographer #SarojKhan ji is no more. She made dance look easy almost like anybody can dance, a huge loss for the industry. May her soul rest in peace 🙏🏻

OMG. Woke up to this terrible news of Saroj Khan passing away. A master of her art. Always received her unconditional love. Had the opportunity to work with her in Billo Rani song from Goal. May God give her soul peace. RIP. pic.twitter.com/RD4QSC2TT6

Every actors dream is to dance under your tutelage. RIP #SarojKhan ma’am you will be thoroughly missed. pic.twitter.com/iKFyHnXtK5

#RIP SAROJI YOU WILL BE MISSED …. big loss to dance fraternity ….. pic.twitter.com/1Kv5B6CpKv

Saddened to hear of the demise of #SarojKhan . She was the one who institutionalised choreography in Indian Cinema. pic.twitter.com/m6NXctJ2mt