COVID-19: The Oldest Durga Puja Pandal In Bhubaneswar Struggles To Find Its Feet 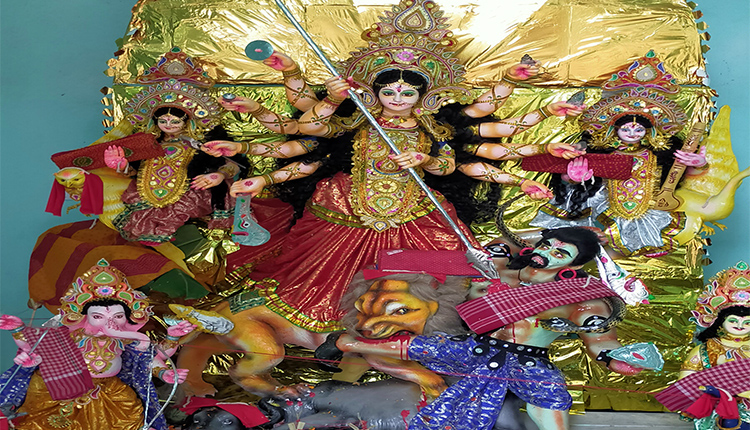 Bhubaneswar: The much awaited and hailed as one of the country’s oldest Durga Puja, is celebrated with much pomp in Cuttack. However, the temple town of Bhubaneswar has a special place in the hearts of the devotees of the Devi, celebrating the festival with equal gusto though in a smaller scale.

Reportedly the oldest Puja Pandal in the temple city, at Bania Sahi in Old Town, that boasts of a history unparalleled with others, today struggles to find its feet, thanks to the state government’s apathy and the COVID-19 induced restrictions.

The annual Basanti Durga Puja, hosted by the Darzi Sahi and Bania Sahi Puja Committees, saw the dawn for the first time in 1936. As claimed by the Bania Sahi Puja committee President, Ashok Satapathy, their ancestors were the first in Bhubaneswar to host a Durga Puja on a Pandal.

In the initial days, the idol was worshipped in a temporary Pandal for many years. It was only in 1974 that the Goddess found a permanent place and was shifted to a permanent pandal.

Those days, electricity was a luxury few people could afford. With no power supply, a diesel powered generator-set was hired at that time from the nearby Jatani town, to light the Pandal.

Similarly, all the decorations were sourced from local artisans, who used zari and clothes to decorate the tableau unlike the recent trend of sourcing artisans from Kolkata. The cultural programmes included traditional Odia ‘Pala’ and ‘Daskathia’ performances which the audience used to enjoy every night.

The Bhagabat Ghar (Bhagabat House), where the elderly visited in the evening to get a dose of their religious fodder, houses many ancient manuscripts that needs immediate attention. Apparently, a leaking roof of the Bhagabat Ghar damaged many of those valuable manuscripts and the locals demand that the remaining few needs to be preserved as soon as possible. The Puja Committee members demanded that the government should take steps in this direction as soon as possible.

The specialty of this particular Pandal is the Prasad or Bhog that the Goddess is offered on the Ashtami. The delectable delicacy is called Charuanna, made from rice, Ghee (Purified Butter), Kaju (Cashew Nuts), Kismis (Raisins) and some other natural flavouring agents. And fruits are served as Bhog on other days.

However, the prevailing pandemic has thrown normalcy out of gear, and has also cast its shadow on Durga Puja celebrations in Bhubaneswar this year. And the Bania Sahi puja is no exception.

After a prolonged legal battle, the Puja committees in the twin-city secured a permission from the court to hold the Puja, but sans devotees. While the order to bar visitors from the mandap has been issued to maintain social distance, it has proved to be a big blow and the final nail in the coffin for an already struggling Bania Sahi puja committee.

Adhering to the new rules, the height of the idol has been kept under four feet to make the immersion easier. Nobody except a few puja committee members are allowed inside the mandap. Only one purohit (Priest) and his assistant are allowed to carry out the Puja. And the most important among the rules to be followed, a screen has been hanged at the main entrance barring any view of the idol inside for the visitors.

The donations were insufficient this year, making it difficult for the organisers to conduct a decent Puja and immersion. Even the prasad, that the locals await the whole year, has been cut short to a limited quantity annoying many. 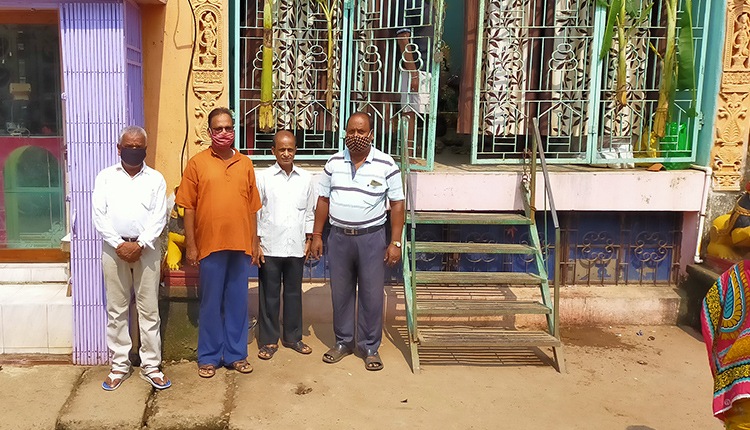 “We have limited the quantity of our Bhog this year owing to the meagre donations we have received. Not only Bhog, there will not be any lighting on the outside, nor any cultural activities near the Pandal,” said Satapathy.

And their trouble does not end here. As per Satapathy, they face difficulties due to the dilapidated road conditions in front of the mandap and near Bhoi Sahi in Old Town during the immersion procession. Even after many attempts made by the local administration to repair the road, it still remains bumpy for some reason best known to the authorities.

Talking of the immersion, Satapathy said, “The officials of the Commissionerate Police had told us to carry the idol during immersion in a smaller vehicle, like a commercial auto rickshaw, but we sought permission to carry it in a truck as usual.”

“Though we have made the idol smaller, the height of the frame (Pistha) on which the idol stands remains same. So we cannot really carry the whole structure in a small vehicle,” added Satapathy.