Facebook's Zuckerberg Is Losing Pounds; Users Say 'You Have Made Our Life Miserable'

Facebook's Zuckerberg Is Losing Pounds; Users Say 'You Have Made Our Life Miserable'

Though recently, the social media platform was making headlines following reports of users’ security breach and WhatsApp, also a Facebook owned firm in controversy for its new privacy policy, users are quite engrossed with both the virtual networking and messaging platforms.

Whether Facebook is harmful or helpful; it’s a never ending debate. But, recently Facebook users have expressed their ‘dissatisfaction’ and many have admitted that the platform and its owner Mark Zuckerberg have made their lives miserable!

These days, Mark Zuckerberg seems to be quite active on his self-made social media platform. In a recent post, Zukerberg posted: “Do you ever get so excited about what you’re working on that you forget to eat meals?”

The post has garnered over 216K comments and over 714K reactions with 19K shares. Among the 216K comments, one comment drew attention of FB users. It was Mark’s dad Edward Zuckerberg! Edward commented: “Do you need Mom and I to deliver meals?”

This comment drew attention of multiple users and everyone had their own story and comments to respond.

Further Mark said, “Keeps happening. I think I’ve lost 10 pounds in the last month from this, but our new products are going to be fire (emoji)”

One user commented: “When your dad follows you on social media and embarrass you by commenting on your post.. even Zuk is not spared. Interestingly daddy Zuk’s bio says he is CEO of ‘Painless Social Media’.”

Another user said: “You lost 10 lbs working on products this week? I’m guessing you are doing a lot of VR games and fitness apps. maybe throw in a VR pie eating contest in there so you don’t get too skinny.”

“no no, Mr Zuckerberg, we first eat a lot after that we probably work something…”, commented another user.

However, many users commented on Edward’s comment which seems like they are complaining a father about his son’s mischief.

One user said, “Dear Edward… Your Son Mark destroyed my life !!! Before facebook my friends used to come to my parent house to wish me Happy Birthday, eat cake and for sure to give me gifts like: Eau de cologne 777, boxers, socks, soap zest, pictures album cover, flanelle Hanin… Now maximum I receive comments and likes !!!! What is the compensation for all these damages???? Who will pay for that??? so please at least don’t cook for him.” 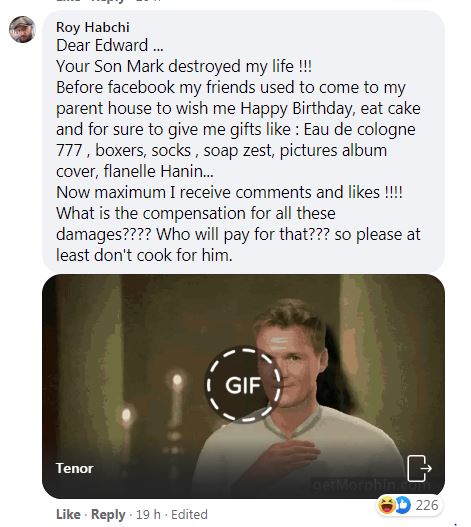 Another user commented: “You ever sit back and think about how your nut changed the world?”

Apart from the complaints to Dad Zuckerberg and Mark, people also made appeals to the Facebook owner.

“Mark, please do something urgently to ban fake ID’s in India, such ID’s are causing rift between communities by spreading fake news and it could result in breakout of communal riots. If that happens, you would be complicit in it. Hence, please make verification mandatory for all ID’s for the sake of humanity,” said an user from India.

While another user wrote: “Mark Zuckerberg, These days, I am forgetting to eat meal because of the officially waged genocide on my people, the people of Tigray. I am with no appetite to eat and perform my work normally. We are restlessly shouting to be a voice for the voiceless. I kindly request you to share this social and human responsibility for global solidarity. Thank You!” 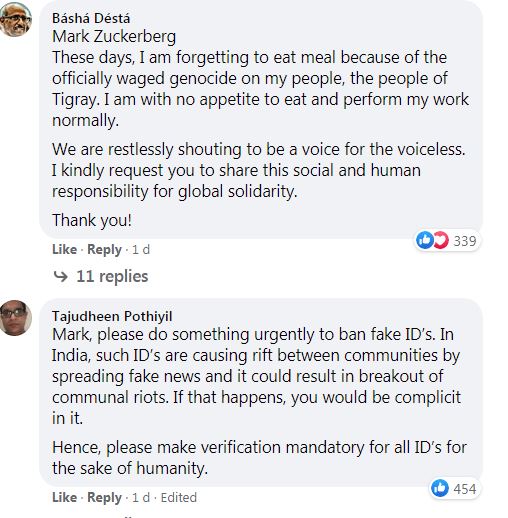 As per the practice, certain social media users don’t leave a single chance to troll someone publicly and the victim this time was the owner himself. Certainly, we are unaware if Edward visited Mark with his mom or not and if he was able to gorge on delicious mom-made food, but Mark’s post undoubtedly served as an incident to ‘recall and laugh’.