MLA Das was riding the bike while the Minister was pillion riding (both without helmets) when traffic police caught them near Hemkapada chhak in Balasore.

As per reports, the incident happened in the morning. While going for an inspection to a school in Balasore, MLA Das was riding the bike while the Minister was pillion riding (both without helmets) when traffic police caught them near Hemkapada chhak in Balasore.

The traffic police then issued a challan of Rs 1,000 in the name of the owner of the bike. Later, MLA Das reportedly paid the fine.

Rahul gets discharged from hospital, to meet Janjgir Champa collector 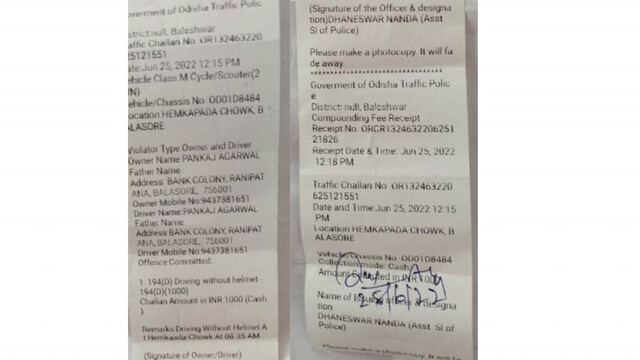 “We were in a hurry to reach the school for an inspection and forgot to wear helmet. When we were crossing Hemkapada square, a gentleman reminded us that we don’t have helmets. Then we became aware of our fault. Subsequently, we also got intimation from the traffic outpost. We went to the outpost immediately, confessed our fault, and paid Rs 1,000 as fine,” said Swaroop.

Notably, Dash was on a field visit to Balasore when he came across the sorry state of teaching in the school. The displeased minister held both the class teacher and the Headmistress responsible for making students learn the minimum mathematics and sent the Head Mistress a show-cause notice.

Dash has also directed to hold the salary of the headmistress until the class 3 students are able to recite the multiplication tables from 2-15.