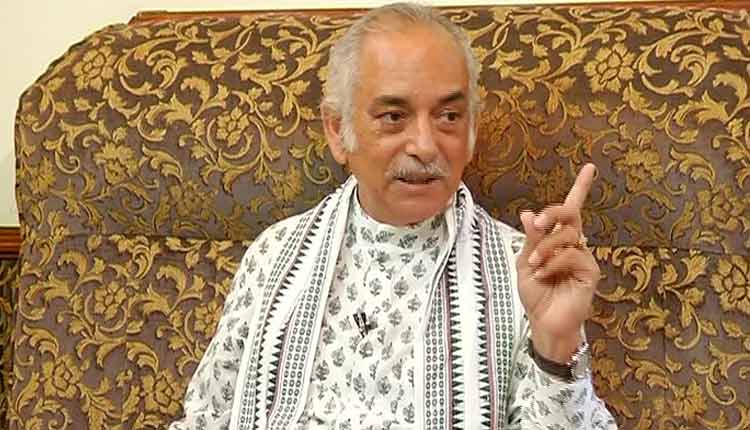 The fate of this year’s Rath Yatra hung in balance till the very last minute keeping millions on tenterhooks. It got cancelled once, before being reconsidered again. The first servitor of the Lord Jagannath, Puri Gajapati Dibyasingha Deb, who was in the thick of the drama, gives OTV an exclusive first-hand account of what transpired in one of the most defining episodes in the history of the Jagannath Culture.

OTV: How was your experience of Rath Yatra this year?

Gajapati: This year’s Rath Yatra was an exception. The difference between the normal practice and this year’s festival was the ‘Haribol’ chants of the devotees were missing on the Grand Road (Badadanda). I wouldn’t say I was not disappointed because of the conduct of the festival without devotees due to the COVID19 restrictions, but we should look at it in a different perspective. During the Rath Yatra, the Lord not only comes out of the temple for the devotees present in Puri Badadanda, but to meet the whole humanity.

OTV: A lot of people questioned the rationale behind Rath Yatra during a pandemic. Your views.

Gajapati: It’s true that religion especially Hinduism never demands practice by endangering lives. Odisha has never seen this kind of a situation ever. So, it was the responsibility of the Odisha government to strike a balance between Lord Jagannath’s wish and the management of COVID-19 in the state.

OTV: What could have been the repercussion had Rath Yatra been cancelled, given that it was in fact cancelled many times before in order to safeguard the Lord from the invaders?

Gajapati: First we have to see whether that situation hundreds of years back could be compared to this pandemic situation. We should always remember that the instances some people cited to cancel Rath Yatra were such that it rendered conduct of Rath Yatra impossible because of the fact that the Lord Jagannath and his siblings weren’t present in Srimandir. They were taken to safer places to protect them from invaders.

Immediately after the enforcement of National lockdown on March 24, we wrote to the district administration urging them to speak to the government on the rituals of Lord Jagannath. I proposed that if the COVID situation worsens before Rath Yatra and the government decides to cancel the festival they should take the opinion of Shankaracharya prior to that. After getting no response from the government, I forwarded the same letter to the Law Minister and Chief Secretary on April 15 urging them to take quick decision on Rath Yatra as Akshay Tritiya, when Chariot construction had to begin, was just days away. However, we got no response from them as well. Then we decided to take the opinion of Shankaracharya Nischalananda Saraswati. He told us to keep the tradition of Srimandir intact without compromising on Government’s COVID19 guidelines. And that would only have been possible by performing the rituals inside temple premises. As per his advice, Akshay Tritiya rituals on April 26 were performed inside Srimandir and that paved way for Rath Yatra. On that very day, I again wrote to Odisha CM, Naveen Patnaik urging him to consider conducting Rath Yatra without devotees as decided by the Srimandir Managing Committee. On May 4, the Managing Committee met again and it was decided to demand the government to come up with a decision as it was already getting late. On May 7, the Central government allowed us to start construction of the chariots by adhering to COVID-19 guidelines.

OTV: So the construction began, but where did the problem arise regarding conduct of Rath Yatra?

Gajapati: During the chariot construction process, somebody filed a Public Interest Litigation (PIL) in the Orissa High Court urging the court to postpone the festival. The managing committee met again on May 30 just before Snana Yatra of Mahaprabhu and it was decided that the festival can’t be postponed as the date can’t be altered.

OTV: What about Orissa High Court’s ruling to pull the chariots by machines or elephants?

Gajapati: Using machines to pull the chariots wasn’t possible, however in the past when the chariots couldn’t be pulled due to bad roads; elephants were brought in to push the chariots from behind. The situation improved after asphalt was laid on the Badadanda. I sincerely think that the Odisha government should have taken a decision on that very day (June 9) when the High Court had put the ball on the Government’s court after hearing the PIL. Odisha govt shouldn’t have let the fate of Rath Yatra hang in balance till the last minute. I had clarified many times that Srimandir Managing Committee’s proposal was to conduct Rath Yatra only in Puri.

OTV: Why do you think the Government remained silent when the petitioners moved the Supreme Court?

Gajapati: It was baffling for all. On one hand the government remained silent on the issue and on the other hand they provided all assistance to construct chariots and allowed all the rituals to be completed including Snana Yatra. The issue became more confusing, after the Chief Administrator of Shree Jagannath Temple Administration wrote to the Law Minister of Odisha on June 5 to allow them to conduct Rath Yatra. Until the morning of June 18, it never occurred to me that the Odisha government didn’t want the festival to happen. I was crestfallen after hearing their argument in the Supreme Court. I was sure that the annual sojourn of the Holy Trinity to Gundicha Temple this year was over as there was no time to alter the SC’s decision.

The SC order pointing out that around 10 to 12 lakh people are likely to gather for the annual Rath Yatra in Puri shocked me. I felt all my communication with the government during the last two months to ensure conduct of the festival without devotees was rendered fruitless at that very moment.

OTV: Did anybody from the government contact you before the hearing in SC on 18th June?

Gajapati: No, not at all. The communication with the government all these times was mostly one way as nobody from their side replied to me despite my repeated letters regarding Rath Yatra. I believe that if the State government’s lawyer had told the apex court that Rath Yatra could be made possible only in Puri without presence of any devotees, I am sure the court would surely have given the verdict on our favour. The Supreme Court wanted Odisha government to take a stand and unfortunately it took a different stand than us. During such a pandemic situation, no court would ever allow congregation of 10 to 12 lakh people in one place. SC’s verdict was based on only one fact that the petitioner presented and that was congregation of lakhs of people.

OTV: What happened after the SC ruled to cancel Rath Yatra?

Gajapati: It was apparent from the SC order that the State government didn’t support us in conducting Rath Yatra. It was the Shankaracharya, who requested the government and the top court to alter the decision and allow conduct of Rath Yatra in Puri only without devotees which proved to be a turning point. Then in the next two days, a lot of modification petitions were filed in the SC too as the religious sentiments of the devotees were hurt by the conduct of the government. As the demand of the devotees grew and Shankaracharya conveyed his wish, the Centre took cognizance of the matter which proved vital in the whole fiasco. The Union Home Minister Amit Shah spoke with Shankaracharya and me and conveyed his support for Rath Yatra with all COVID-19 restrictions in place. By then, not only the centre, but the State Government too was forced to change their stance on the whole issue and decided to take a favourable stand in the SC.

OTV: When did you feel that Rath Yatra could be a reality this year?

Gajapati: It was all because of Lord Jagannath’s wish that the festival saw the light of the day otherwise a near-impossible task couldn’t have been made possible overnight.

I would like to extend my greetings and say a big thank you to all the petitioners who filed modification applications with the SC, especially the boy named Aftab Hossen from Nayagarh whose application was too moving and his devotion for Lord Jagannath was unmatched.