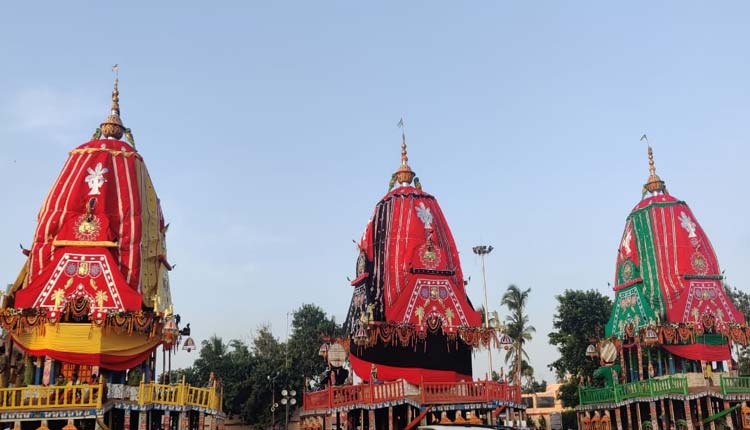 Bhubaneswar: It was a historic day for Shreekhetra, the land of Lord Jagannath when it hosted the world-famous Rath Yatra sans participation of devotees in the wake of coronavirus pandemic. Apart from the holy town, almost the entire Odisha marked the event in devotion which was devoid of its usual merriment that generally hits a feverish pitch in the State during the time.

Even as Lord Jagannath and his sibling deities finally rolled on the Badadanda in Puri following a legal tangle and political controversy, other famous shrines across Odisha and outside could not celebrate the grand occasion owing to restrictions imposed in view of Covid-19 pandemic.

Koraput’s Sabar Shreekhetra, Kendrapara’s Tulasi Khetra, second Shreekhetra Baripada and other places which usually see congregation of lakhs of devotees wore spectacles of silence on the occasion triggering resentment among sections of devotees.

In Sabar Srikhetra, a small chariot was rolled inside the temple premises and all necessary rituals of the deities were performed at a temporary Gundicha temple.

The situation was no different in Tulasi Kehtra where the incomplete chariots were found standing in front of Baladev Jew temple. The Rath Yatra celebration remained cancelled here due to imposition of Section 144.

Similarly, the century-old tradition of Rath Yatra celebration could not be held in Baripada. Due to restrictions, the rituals were conducted inside the temple.

“If case restrictions are not there, crowd of thousands of devotees would participate in the Rath Yatra celebration. It is very sad that the rituals are stopped due to the restrictions,” said a girl in Koraput.

“This is probably the first in 300-year history of Kendrapara that Rath Yatra of the Lords could not be held. It has triggered resentment among the devotees, locals and servitors,” said a resident in Kendrapara.

From town to rural areas, the people of entire Odisha are deprived of the celebration. In Bhubaneswar, ISCKON celebrates Rath Yatra in a grand manner. However, the celebration remained cancelled here due to the restrictions.

Though huge chariots were constructed in Keonjhar, the Trinity’s Rath Yatra could not be held there too. In Bhadrak, the Rath Yatra was celebrated with a handful of servitors to preserve the tradition.

In Nuapada, both Hindu and Muslim rolled a replica of chariots to preserve the tradition. But devotees could not catch a glimpse of the Holy Trinity on the chariots.

Upendra Mishra Das, vice-president of ISCKON Bhubaneswar said, “Though Rath Yatra is a big event, it remained cancelled due to restrictions.”

A Baripada resident said, “It is very painful. Rath Yatra is celebrated every year and we pull the chariots. But this year, Lord Jagannath and his siblings did not come to the chariots and we could not have darshan of the deities.”

Apart from Odisha, Rath Yatra is celebrated with much pomp and splendour in other parts of India and other countries, but the Covid-19 restrictions also stopped the celebrations.

Some countries including New Zealand which successfully tackled the pandemic celebrated the festival in a restricted manner.