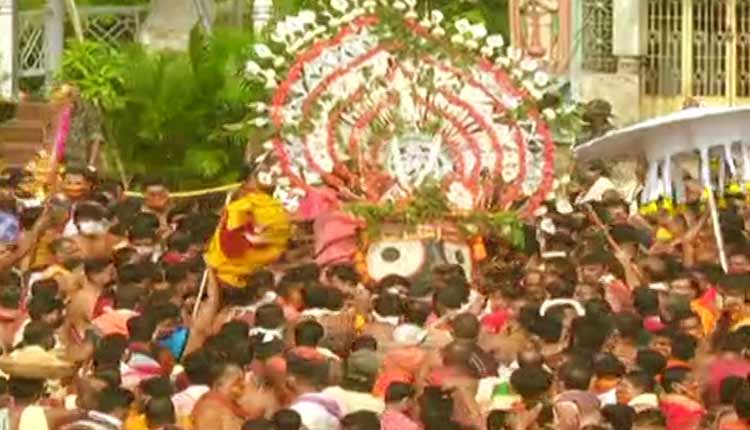 Puri: This year’s Rath Yatra will go down in the pages of history as a unique episode with devotion of millions of devotees put to extreme test amid the grim realities of COVID-19 pandemic. As a major relief, barely hours before the mega festival, Supreme Court on Monday had reconsidered its previous order and allowed the conduct of Rath Yatra only in Puri.

As per the conditions set by the apex court, marathon meetings were organised yesterday to ensure that all the COVID-19 guidelines were strictly followed during the conduct of the centuries-old festival of the Lord Jagannath.

The LORD keeps his PROMISE…

… Comes out of his abode to meet his beloved devotees

Even the servitors were seen wearing masks or wrapping the traditional ‘gamcha’ (towel) to cover their faces as they escorted the Holy Trinity- Lord Balabhadra, Goddess Subhadra and Lord Jagannath along with Lord Sudarshan in the ceremonial Pahandi which began at around 7:10 AM today.

Even though Lord Jagannath stepped out of his abode to give darshan, the scenes at Badadanda were different this year as Rath Yatra is being organised without the public attendance in view of the COVID-19 pandemic.

An uncharacteristic atmosphere hung above the Badadanda in Puri that wore a deserted look, as devotees confined themselves to their homes and watched the divine spectacle through telecast & webcasts. Usually, Rath Yatra in Puri draws lakhs of devotees from across the world. It is during Rath Yatra that Lord himself comes out of the shrine, Srimandir, to meet and bless his devotees.

A thick blanket of security shrouded Puri with over 50 platoons of police force deployed for the smooth conduct of the Rath Yatra as per SC guidelines. All the entry routes to Puri city were sealed by the State government by clamping a shutdown from 9 PM yesterday. The restrictions will remain in force till 2 pm tomorrow.

50,000 Made In India Ventilator Under PM CARES Fund To Fight COVID-19