Urfi Javed is always in the news for her quirky outfits, and her bold statements have yet again proved that she is the queen of tabloids. However, this time it is the love confession of the diva which has grabbed the attention.

Urfi is known for her bold and outspoken personality. From talking about her strained relationship with her father to saying 'I don’t believe in Islam', she has never shied away from expressing her thoughts on social media.

It seems Urfi is quite smitten by Charlie Puth and she wants to marry him only. 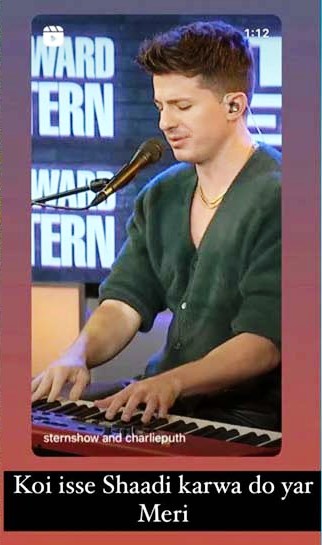 Charlie Puth is an American singer, songwriter, and record producer who is best for his stand-out hits like "See You Again" and "Marvin Gaye."

Notably, Urfi has been quite open about her love life and had earlier talked about her ex too.

For the unversed, Urfi was in a relationship with Anupamaa fame actor Paras Kalnawat for a short span of time.

However, the duo who had a bitter break-up a few years ago seems to have patched up as the latter was not only present at Urfi’s 25th birthday bash but Paras also took to his social media and shared a love-filled post for Urfi wishing her to have the best of everything.