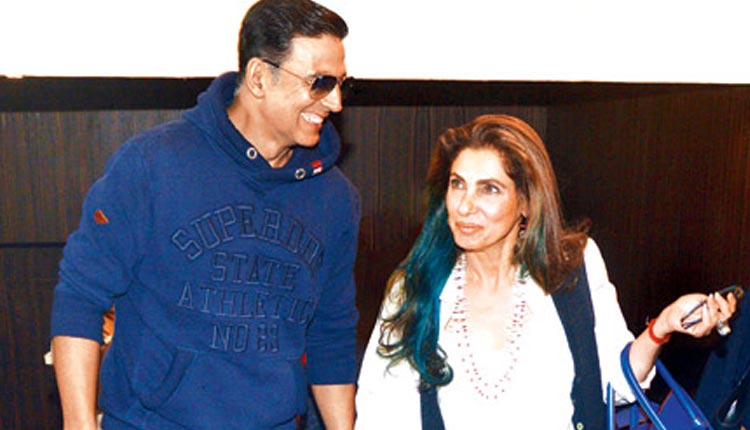 Akshay Kumar shares a very good relationship with his mother-in-law Dimple Kapadia who herself is a well-known actress. From her debut movie Bobby to make a re-entry into Bollywood with Saagar and then very recently portraying mother to Salman Khan’s Chulbul Pandey in Dabangg, the sixty-plus actress have time and again proved her versatility.

She is a regular at all the functions that are held at the Khiladi Kumar’s house and are quite comfortable with the entire family of the superstar. On the other hand, Akki is known for playing pranks on his friends and family members and even plays tricks on the sets during shooting. But no one expected him to come out with one of his superb pranks that too on his mom-in-law during an award function.

Last year at the Most Stylish Awards function Dimple Kapadia was called on the stage to give an award to her son-in-law. Apart from the trophy, she also had to attach a brooch on Akshay’s coat. So Dimple, being so comfortable with him just came forward and started pinning the brooch when suddenly the actor let out a scream and all everyone can see is blood on his white shirt. Dimple was just aghast and covered her face with hands simply too embarrassed to face the situation with all the stars in the audience looking up to both of them.

Even Twinkle Khanna who was in the audience was shocked to see blood coming out of her husband’s shirt. But after a few seconds, everything changed as it turned out that Akshay had just played a prank with her as usual. Dimple was very much annoyed and said,” This is what he does with me all the time, utter nonsense, you got me scared”.

Akshay continued the prank saying to Dimple,” See what you have done to me.” However, later on, he hugged and thanked his mom Dimple for coming out and giving the award. But the moment everyone saw blood on Akshay Kumar’s shirt they were shocked which made the evening unforgettable for many. It is one of the epic pranks played by the Khiladi Kumar publicly and even today Dimple cannot stop laughing remembering it.

Voice assistant to help you shop on Flipkart