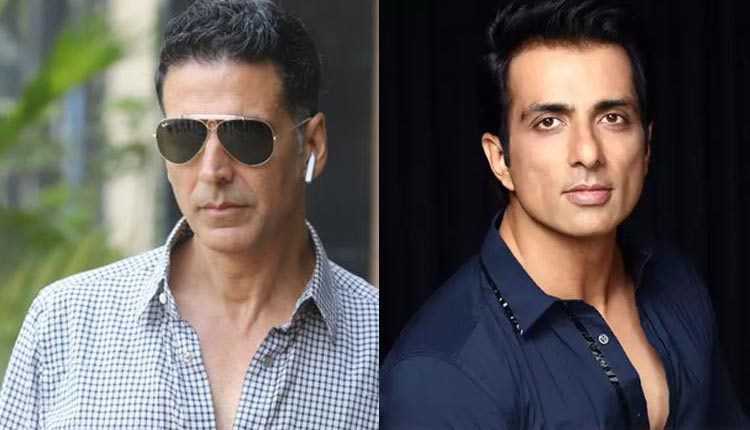 Sonu Sood has emerged as one of the biggest icons during the COVID-19 crisis. Apart from donating to various funds, the actor has come forward personally to ensure that the labourers get back to their villages and towns safely after watching them struggle for days. The plight of these labourers especially from Uttar Pradesh and Bihar who had come to Mumbai, New Delhi, and other metro cities is indeed very bad.

Watching all their struggle the actor decided to help them get back to their places and arranged for buses and other means of transport. A couple of days ago he even airlifted Odisha girls from Kerala so that they could reach their hometowns. All these activities have made Sonu Sood the superhero and now people have started comparing his fame to none other than the Big B Amitabh Bachchan.

Temple Of Sonu Sood Or A Movie?

While the labourers cannot stop appreciating their Sonubhai, there have been paintings, sketches and so many memes dedicated to him every day on social media. The latest is that people are even planning to build a temple of Sonu Sood which can be a huge thing considering his current status as an actor. Many even believe that he is doing all this for his political gain but that does not seem true.

Dear @SonuSood sir, someone sent this. So apt for you 🙏🙏 pic.twitter.com/tPJLQGcX7J

However, one thing that caught the attention of the social media users was a tweet that showed leading filmmaker Sanjay Gupta said that Akshay Kumar will be playing Sonu Sood in his next movie and whether he can get the rights to it. Many believed the news to be true as the Khiladi Kumar is known to play characters that voice the troubles of common man such as Padman or Toilet Ek Prem Katha.

The tweet became viral immediately but later on was found to be a fake and was deleted. So even though Akshay Kumar is not playing Sonu Sood in his next movie project, the Chedi Singh of Dabangg has given enough content for the movie producers to think of coming up with a project on his life, maybe a biopic?