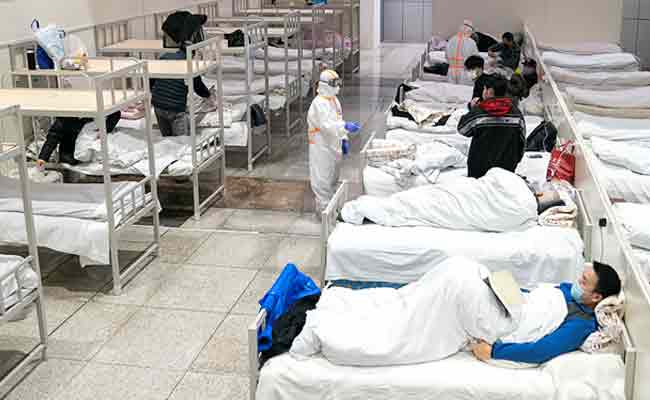 Beijing: China applauded India’s aid during Beijing’s battle against Coronavirus on Monday and has confirmed to assist India and share its experience in handling the COVID-19 outbreak and preventing the spread of the deadly virus.

India sent about 15 tonnes of medical assistance comprising masks, gloves and other emergency medical equipment to the coronavirus-hit Wuhan city on February 26 by a military plane, which also evacuated 112 Indians and several foreign nationals.

In his media briefing here, Foreign Ministry spokesman Geng Shuang said China is extending assistance and aid to local governments in 19 countries which have extended assistance to it when the coronavirus outbreak struck the country.

Asked about the conspicuous absence of India in the 19 countries listed by him, Geng said India and China have an “unimpeded channel of exchanges and the exchange is close.”

“We have received assistance from the Indian side and we applaud that. We have a mechanism of exchanges and China has been notifying the information to India in a timely manner,” he said.

“We have also been providing assistance and necessary convenience to the Indians in China. We have been protecting their health and safety,” he said.

“As the pandemic spreads, we have also noted the situation in India. China and India are the only two countries with a population of over one billion. The virus is a challenge to all and we would like to share our experience with the Indian side and further provide necessary assistance to the Indian side,” he said.

Geng also pointed out India was part of a video conference conducted by the Chinese officials to share their COVID-19 experience with Eurasia and South Asian countries recently.

Geng said the conference lasted for four hours and around 2,000 representatives participated in it. The participants think it is timely and necessary to learn from China’s experience, he said.

China, which is battling the coronavirus since January 23, has reported no new domestic cases of the COVID-19 on Sunday but reported nine deaths taking the death toll to 3,270 as it ramped up measures to strictly quarantine people coming from abroad.

The overall confirmed cases on the Chinese mainland has reached 81,093 by the end of Sunday. It included 3,270 people who died of the disease, 5,120 patients still undergoing treatment, 72,703 patients discharged after recovery, according to China’s National Health Commission.

COVID-19 Drugs: WHO Global Trial Looks At 4 Most Promising Medications

The World Health Organisation (WHO) has announced a global trial to find out if any medication can actually treat infections of the novel coronavirus. WHO has made the announcement amid lab tests and examination of 70 drugs and experimental cocktails to find the most promising COVID-19 drugs.

The trial, which could include many thousands of patients in dozens of countries, has been designed to be as simple as possible so that even hospitals overwhelmed by an onslaught of COVID-19 patients can participate, according to the prestigious journal Science.

Scientists have suggested dozens of existing compounds for testing but WHO is focusing on what it says are the four most promising therapies.

These are “an experimental antiviral compound called remdesivir; the malaria medications chloroquine and hydroxychloroquine; a combination of two HIV drugs, lopinavir, and ritonavir; and that same combination plus interferon-beta, an immune system messenger that can help cripple viruses,” said the article in the journal of the American Association for the Advancement of Science (AAAS).

The first COVID-19 patient diagnosed in the US — a young man in Snohomish County, Washington state — was given remdesivir when his condition worsened and he improved the next day, according to a case report in the New England Journal of Medicine (NEJM).

A Californian patient who received remdesivir recovered as well.

When it comes to Chloroquine and hydroxychloroquine, the “WHO scientific panel designing SOLIDARITY had originally decided to leave the duo out of the trial but had a change of heart at a meeting in Geneva on 13 March, because the drugs “received significant attention” in many countries.”

The available data are thin and results from COVID-19 patients are murky.

Chinese researchers who report treating more than 100 patients with chloroquine touted its benefits in a letter in BioScience, but the data underlying the claim have not been published.

All in all, more than 20 COVID-19 studies in China used chloroquine or hydroxychloroquine, WHO notes, but their results have been hard to come by.

“WHO is engaging with Chinese colleagues at the mission in Geneva and have received assurances of improved collaboration; however, no data has been shared regarding the chloroquine studies.”

Researchers in France have published a study in which they treated 20 COVID-19 patients with hydroxychloroquine. They concluded that the drug significantly reduced viral load in nasal swabs. But it was not a randomized controlled trial and it didn’t report clinical outcomes such as deaths.

“Hydroxychloroquine, in particular, might do more harm than good. The drug has a variety of side effects and can in rare cases harm the heart,” said the Science article.

Ritonavir/lopinavir combination drug, sold under the brand name Kaletra, was approved in the US in 2000 to treat HIV infections.

The first trial with COVD-19 was not encouraging, however. Doctors in Wuhan, China, gave 199 patients two pills of lopinavir/ritonavir twice a day plus standard care, or standard care alone.

There was no significant difference between the groups, they reported in the New England Journal of Medicine (NEJM) on March 15.

“But the authors caution that patients were very ill — more than a fifth of them died — and so the treatment may have been given too late to help.”

Ritonavir/lopinavir+interferon beta is another option. A combination of the three drugs is now being tested in MERS patients in Saudi-Arabia in the first randomized controlled trial for that disease.