US slams China for 'delay' in sharing information on coronavirus 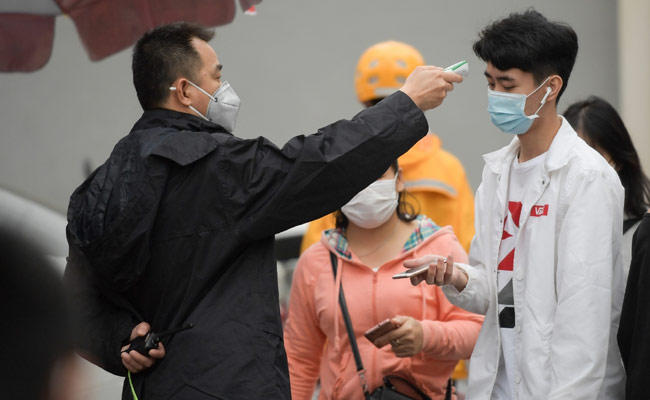 Beijing/ Washington: China reported no domestically transmitted coronavirus cases for the third consecutive day even as seven more fatalities have been confirmed, taking the death toll in the country to 3255.

No new domestically transmitted cases of COVID-19 were reported on the Chinese mainland for the third day in a row on Friday, China’s National Health Commission (NHC) said on Saturday.

On Friday, seven deaths and 36 new suspected cases were reported on the mainland, with all the deaths reported from virus epicentre Hubei Province and its capital Wuhan, it said.

The overall confirmed cases on the mainland had reached 81,008 by the end of Friday, which included 3,255 who died, 6,013 patients still undergoing treatment, 71,740 patients who had been discharged after recovery, the NHC said.

The commission said that 106 people were still suspected of being infected with the virus.

The NHC said 41 new confirmed COVID-19 cases were reported on the Chinese mainland on Friday from the people arriving from abroad, taking the total number of imported cases to 269.

While reporting about a steady increase in imported cases, the NHC did not specify whether the infected persons were foreigners or Chinese nationals returning from abroad.

China has imposed strict quarantine measures for all those returning from other countries.

Of the imported cases on Friday, 14 were reported in Beijing, nine in Shanghai, seven in the Guangdong Province and four in the Fujian Province.

On the other hand, the United States on Friday slammed China for the “delay” in sharing information with its technical experts on the deadly coronavirus.

“We need to know immediately. The world is entitled to know. The Chinese government was the first to know of this risk to the world, and that puts a special obligation to make sure that data gets to our scientists, our professionals,” US Secretary of State Mike Pompeo told reporters at a White House news conference here.

“When you see a delay in information flowing from the Chinese Communist Party to the technical people who we wanted to get into China immediately to assist in this, every moment of delay connected to being able to identify this risk vectors creates risk to the people all around the world,” he said.

Pompeo said it was not about blaming someone.

“This is about moving forward to make sure that we continue to have the information we need to do our jobs,” he said.

“We talk about the absence of data sets, not being able to make judgments about what to do. This is also about transparency, this real-time information sharing isn’t about political games or retribution. It’s about keeping people safe,” he insisted.

US Health Secretary Alex Azar told the reporters that China informed the US about the coronavirus in January.

“In January within two weeks of China’s notifying WHO about the virus and with only 45 cases in China we began screening travellers from Wuhan. Then over time as the outbreak evolved the President restricted travel from China, Iran and Europe. Our health experts say that these measures have been truly effective at slowing the viruses spread to our shores,” Azar said.

President Donald Trump told reporters that he has a good relationship with Chinese President Xi Jinping.

“I have a very good relationship with China and with President Xi. I have great respect for President Xi. I consider him to be a friend of mine. It is unfortunate that this got out of control,” he said.

The coronavirus, he reiterated, came from China.

“They came from China, it got out of control. Some people are upset. I know — I know President Xi. He loves China. He respects the United States and I have to say I respect China greatly and I respect President Xi,” Trump said.

Coronavirus Restrictions: Here Is The List Of Shops That Will Remain Closed

Driver Killed After Car Plunges Into Canal In Odisha