Two Dead As Bhubaneswar-Bound Bus Overturns Near Hajaridanga In Rayagada 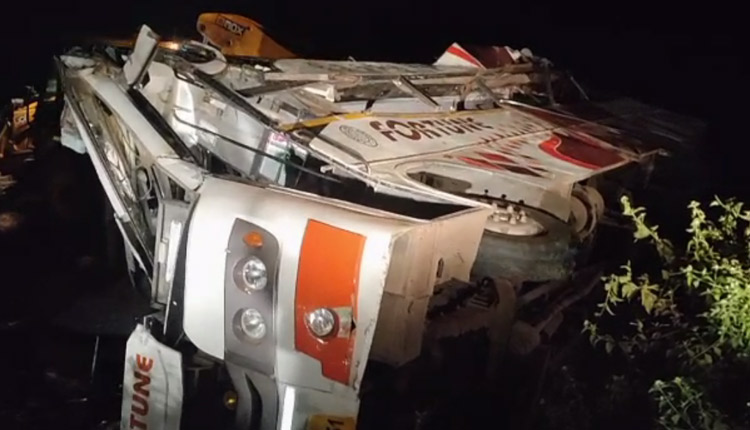 Rayagada: At least two persons were killed after a bus en route Bhubaneswar from Laxmipur in Koraput overturned near Hajaridanga under Bissamkatak police limits in the Rayagada district Monday night.

As per preliminary reports, more than seven passengers have been injured in the mishap while two others including a passenger and the pilot of the bus died on the spot after getting crushed under the vehicle.

It is being said that the bus driver dozed off when the vehicle was taking a turn, and subsequently he lost control over the wheels and the vehicle overturned.

Soon after the mishap, Police officials along with fire brigade personnel rushed to the accident site and conducted rescue operations with the help of JCB vehicles. All injured were initially admitted to the Bissamkatak hospital while a few others have been referred to Vizag hospital following deterioration of health condition.

Police lodged a suo motu case and started investigation into the matter. The identity of two deceased is yet to be ascertained.

According to the co-pilot of the bus, he was having his dinner after passengers from Rayagada were on-board, when suddenly he felt a jerk and the bus overturned in the blink of an eye.

Pramod Kumar Behera, Collector of Rayagada who reached the spot to take stock of the late-night rescue operation informed, “The accident took place between 10.15- 10.30 PM. This is not a sharp turn where the bus overturned and accident could have been avoided if the driver were alert.”

“So far, two persons have died and many have been admitted to Bissamkatak hospital. Some passengers with serious injuries have been referred to Visakhapatnam hopsital. We are making necessary arrangements to shift them for better treatment,” added Behera.