Udita had shared the conversation with her father after her 'experimentation with the possible groom'.

A conversation between a father and fintech Co-founder daughter regarding the latter's matrimonial match has gone viral on social media.

The post has got more than 12,000 likes and generated 921 retweets till Monday morning.

The screenshot of the conversation was shared by the daughter under the title "what getting disowned by father looks like."

No one can be forced for jabs, vax norms not arbitrary: SC

Sensex tumbles over 648 points in early trade; Nifty falls below 17,000

Udita Paul, co-founder of Bengaluru-based Salt was sent a matrimonial match by her father. Udita instead of responding in a traditional way wanted to hire the probable groom on board her company.

She had asked the man to send his profile and was also given the link. Udita had shared the conversation with her father after her 'experimentation with the possible groom'. 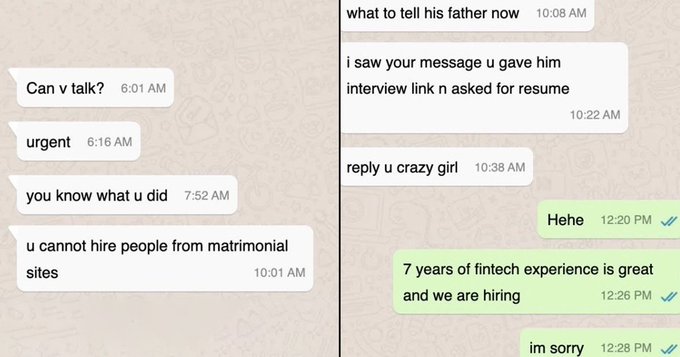