Odisha to fill up 779 vacant posts in Plus 2 colleges, check district-wise vacancies

Odisha to fill up 779 vacant posts in Plus 2 colleges, says Samir Dash

Odisha School and Mass Education Minister Samir Ranjan Dash on Wednesday said the government is taking steps to recruit eligible candidates and fill up the vacant posts in various Plus 2 colleges across the State.

During the Monsoon session of the Odisha Assembly, the Minister said as many as 779 posts (in different grades) are lying vacant in +2 colleges.

"The State government is taking adequate steps for the recruitment of Post Graduate Teacher (PGT)," he informed the House.

CBSE Class 10, 12 board exam results to be announced as per schedule

While replying to a question posed by MLA Ramesh Chandra Berhera on district-wise vacancy in the Plus 2 colleges, Dash said Khordha has the highest vacancy (71) followed by Ganjam (70), Mayurbhanj (64) and Jajpur (58). 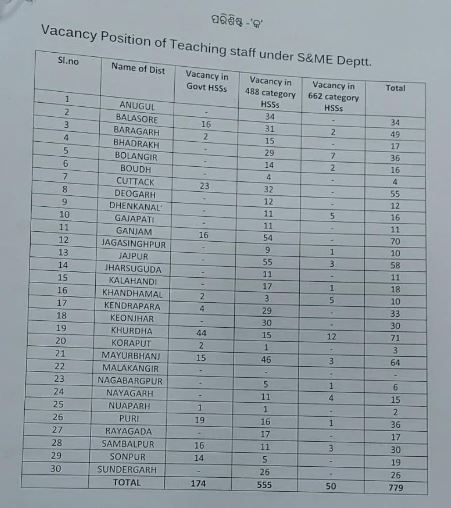 Vacancy in Plus 2 Colleges

Earlier, the State Higher Education informed the House that there are 1036 vacancies in government colleges and measures are being taken to fill up vacancies in 10 different colleges including the Jajpur B.S College.

He further said that collection of data (related to the vacancies in private universities) is underway.