Sonu Sood, who turned out to be a messiah for poor as well as the migrant labourers stuck in different parts of the country during the COVID-19 lockdown, announced the arrival of the new family member on social media.

The new addition in Sonu Sood’s family is ‘Naruto’, a cute little puppy. Interestingly, Sonu’s son has adopted this puppy who was moving on streets of Alibaug.

Taking to his social media account, the Bollywood actor wrote, “My son decided to adopt this puppy who was all alone on the streets of Alibaug, meet NARUTO.”

My son decided to adopt this puppy who was all alone on the streets of Alibaug, meet NARUTO🐶 pic.twitter.com/cTrUQHauQy

Netizens have lauded the actor for adopting a street dog instead of opting for imported breed of the canine family.

It is pertinent to mention here that Prime Minister Narendra Modi, during his last year’s monthly radio programme ‘Mann Ki Baat’, had urged people to adopt dogs of Indian breeds. 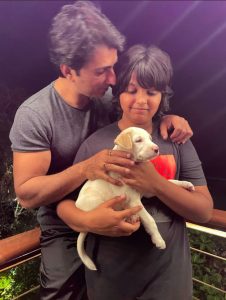 While addressing the nation, Modi had urged people to raise dogs of Indian breeds at their homes if they consider keeping a pet dog.