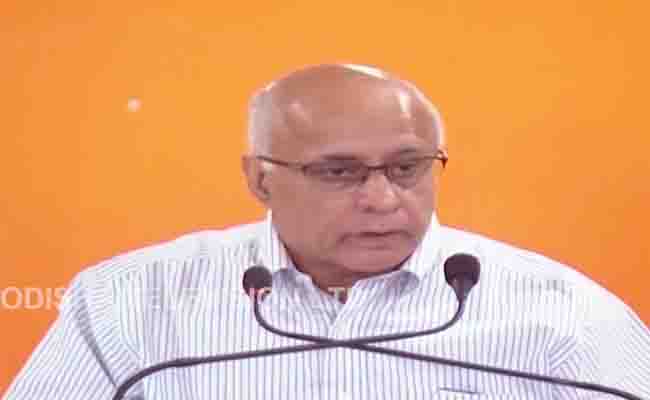 I must confess I was completely floored. I was watching it live as Subroto Bagchi, the chief Odisha government pointsperson for COVID-19, began his daily press briefing this afternoon. I was struck by the sheer ingenuity of comparing self/home quarantine with Lord Jagannath’s 14-day ‘anasara’ after Snana Purnima! The simile was just perfect. There could not have been a more effective way of making the point to Jagannath loving Odias and dissuading them from joining the mad rush for masks. He scored a Perfect 10 by pointing to the fact that he himself was not wearing one as part of the effort to remove the misplaced notion that masks can protect one from nCorona.

Read More:Column: Fight Against COVID-19 Caught Between Complacency And Panic

It is, of course, possible that the co-founder of ‘Mindtree’ did not hit upon this inspired idea of making his point himself and only borrowed it from someone else. But the way he presented it, he certainly did not give any such indication. He appeared completely original, natural and convincing. A leading techie of the country, he spoke in a language and idiom that the viewers would understand and identify with, besides presenting himself as the quintessential Jagannath loving Odia. There was much else to appreciate in his briefing, not the least of which was listing out the complete menu of the food served to the lone man who has tested positive for the dreaded nCorona virus in the state. It lent a personal and intimate touch to what was a public briefing. I don’t think the state government could have chosen a more articulate and effective person to act as the interface with the media and the people at large on this issue! The Naveen Patnaik government certainly deserves credit for picking the right man for the job.

When I first heard about Bagchi’s decision to join as the Chairperson of the Odisha Skill Development Authority (OSDA) back in the summer of 2016, I must confess I was a little skeptical about his ability to deliver what was expected of him in his new role. Not that I had the slightest doubt about his ability or his suitability for the post. My skepticism came entirely from my rather dim view of the set-up he was walking into. I had thought he would find the atmosphere too stifling and his room for manoeuver too limited for his liking. I remember airing my skepticism in a Facebook post at the time – and getting soundly pilloried by some friends for airing it in public even before he had taken charge!

I was still sceptical when he announced on Twitter his decision to resign from his post to tend to the ailing ‘tree’ he had co-founded in 1999, exactly a year ago. He did say he would return after setting things right in Mindtree, which was facing a hostile takeover bid by a rival company. But not many people, including me, believed he would. I, for one, was convinced he was disillusioned with the work atmosphere here (though it took him a good three years to do that) and was just trying to make a virtue out of a necessity, though I had read about the crisis in Mindtree at the time. [Journalists, after all, are trained to be sceptics, but they don’t realize there could be times when their skepticism could be misplaced!]

I am happy he proved me wrong. True to his word, he returned to his post on June 21, 2019, barely three months after leaving it, once he had set things right in his company. I was happy because I was convinced Odisha needs a man of his ability, drive, energy and articulation to shore up things in the all-important skill development front. By all accounts, he has done a wonderful job of skilling the youth of the state in his four years as head of OSDA. Some people crib about the fact that he has been given the rank of a cabinet minister, but conveniently forget that he has worked extremely hard and diligently for a princely salary of Re 1 a year! In hindsight, his statement after being appointed OSDA that it was time for him to ‘pay back’ the state that had ‘nourished’ him rings so true! His commitment to the state and his ability to deliver the goods is beyond question.

Coronavirus: ‘No Orders Issued To Vacate Tenants In Bhubaneswar-Cuttack’