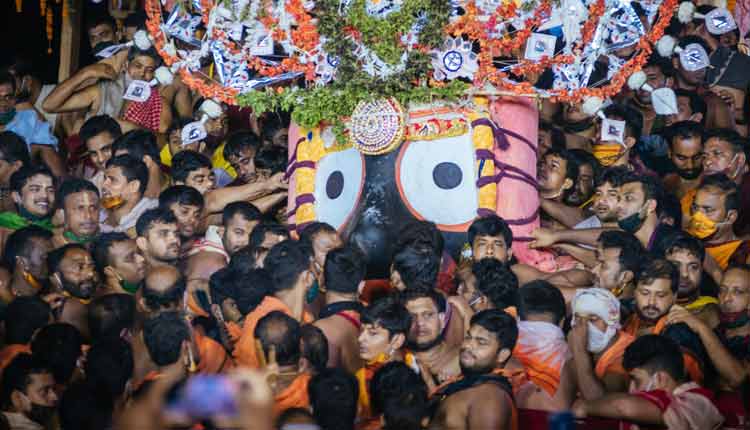 Puri: Ending their annual sojourn, Lord Jagannath and his siblings returned to their abode, Puri Srimandir, on Saturday in Niladri Bije ritual, which marked the conclusion of Rath Yatra.

As per tradition, the ceremonial return of the deities into the temple was kicked off with the customary Goti Pahandi ritual of Lord Sudarshan. Servitors ushered the idol of the Chakraraj into the 12-century shrine amid the chants of Hari Bol and chorus of hundreds of gongs & conches.

After 11 days of sojourn at Gundicha Temple, Lord Jagannath & his divine siblings will now be ushered into the sanctum sanctorum of Srimandir.

Bada Thakura Balabhadra descended from his majestic Taladhwaja chariot and was taken into the Srimandir in ceremonial pahandi and later placed on the Ratna Singhashana after staying out of the temple for nearly 11 days.

Bada Thakura Balabhadra makes way down his splendid Taladhwaja chariot & is escorted into Srimandir where he will ascend the Jewel Throne along with Lord Jagannath & Devi Subhadra.#NiladriBije #RathYatra2020 pic.twitter.com/uAgVGRN6ED

Thereafter, servitors took out the procession of Jagat Janani Subhadra into the sanctum sanctorum. Adorned with Tahia, the special floral crown, the Goddess was escorted into the temple with the whole atmosphere reverberating with chants.

Moment of rejoicing comes amid the chants of Hari Bola and chorus of gongs & conches as Jagat Janani Subhadra returns to Srimandir after Rath Yatra. #NiladriBije #RathYatra2020 pic.twitter.com/iLs7uEiKRf

Despite absence of devotees due to Covid pandemic restrictions, the Badadanda erupted in the chants of Jai Jagannath as servitors alighted the Lord of the Universe, Kalia Thakura from his chariot, Nandighosa.

As per the tradition, during the entry of the Mahaprabhu into the shrine in singular procession, an altercation breaks out between him and an angry Goddess Laxmi who refuses to let him inside for leaving her alone in the temple during his sojourn. But when Devi Laxmi remains steadfast on not allowing the Lord through the Lion’s Gate, the latter offers Rasagola to appease her and is finally granted entry.

With the Niladri Bije, Rath Yatra which was uncertain just two weeks ago due to Covid pandemic, finally concluded.