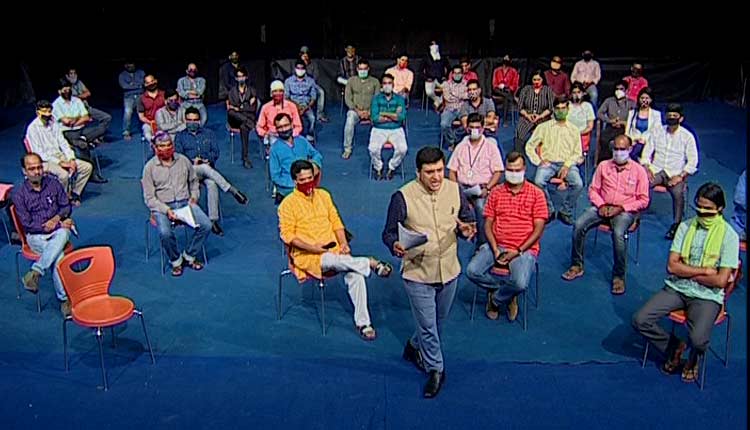 Bhubaneswar: The recent notice to OTV by Bhubaneswar Municipal Corporation (BMC) and subsequent action by Commissionerate Police has triggered widespread resentment among people and intellectuals who termed it as a vendetta against media for highlighting lapses & irregularities of the administration.

People across the State are now questioning the motive behind police showing unwarranted promptness in arresting two persons whose telephonic conversation went viral on social media and was subsequently posted on OTV’s social media platform. The media house has also been served multiple notices for the same.

While participating in a special discussion to question Odisha government’s deliberate attempt to muzzle media, OTV News Editor Radhamadhab Mishra said, “It is now almost three years that there has been a conspiracy and deliberate effort to entangle the channel in a legal wrangle.”

On the viral audio incident and BMC’s allegations, Mishra clarified that “OTV had not telecast any news on it, rather it was posted on the channel’s social media platform. OTV had not made it viral rather the intent was to show the ordeal of a COVID positive patient.”

On BMC’s allegation regarding July 30 video from Hari Nagar slum, Mishra stated that when BMC termed it as unverified, the official clarification was also uploaded promptly on the concerned platform.

“Why Odisha government has become so touchy about COVID-19. Everybody is aware that the State government has been unable to tackle the situation. Patients with multiple diseases are not getting treatment at hospitals across the State,” said Harichandan.

Harichandan further stated where is the fault if some channel has highlighted such irregularities?

“If Odisha government had any objection, it could have approached the Press Council. We have seen such attitude of governments in 1989 and 1999 and when the government becomes arrogant, people show it the door,” Harichandan added.

#COVID19 situation is out of Odisha govt’s control…People with multiple diseases not getting treatment at hospitals… targeting media is arrogance & indication of downfall: #BJP‘s Prithviraj Harichandan at a special discussion on State govt’s targeted aggression towards #OTV pic.twitter.com/l7qBW9E19N

Expressing his views on the entire episode, senior Congress leader, Sudarsan Das said, “Those who will question Odisha government and mismanagement become its target. What wrong did the two persons, who were arrested, do?”

Das said if the government is keen to arrest people, it should arrest those officers who have created panic among people during COVID-19 times and others who have neglected their duties.

Anyone who questions the #Odisha government & its irregularities, becomes a target: Senior #Congress leader Sudarsan Das at a special discussion on state government’s targeted aggression towards #OTV #BMCNoticeToOTV #COVIDMismanagement pic.twitter.com/8wjTQHbFbg

Senior journalist Rabi Das said, “It seems that administrative officers are filled with hatred and anger against OTV. I fail to understand such hostility.”