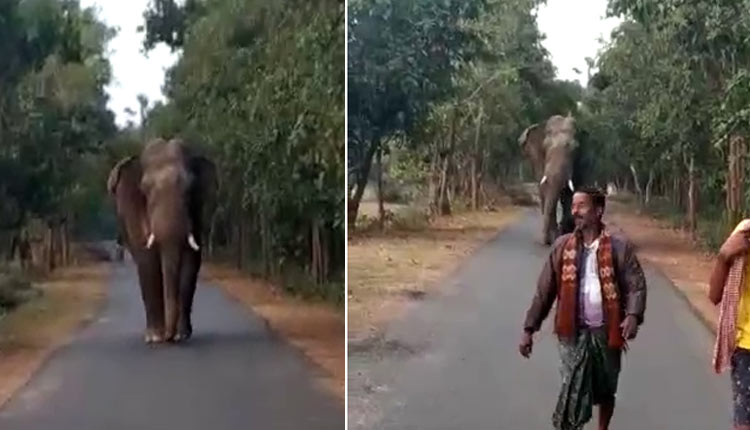 Mayurbhanj: Ever came across a selfie-contest with the tuskers? As bizarre as it may sound, a few youths in Mayurbhanj district dared to march on a misadventure to click selfie with a tusker that had ventured into the forests in Nadapur village under the Betanati range.

A video of the incident which took place on November 24 has now gone viral on social media platforms.

As per reports, a herd of 42 wild elephants staying in the forests of Jharkhand near the bordering area of Mayurbhanj had entered Odisha forests and later ventured towards Nilagiri in Balasore district. Though it had triggered panic among the locals then, shockingly when the herd was on its way back to the Dalma sanctuary in Jharkhand, a few youths from Nadapur started posing for selfies with a tusker, putting their own lives at risk.

In the video, the youths can be seen gathering in large numbers trying to divert its path and annoying the tusker, so much so that the wild animal started chasing them. The selfie and photo obsession has taken these youngsters too far but all this while, they seemed to be enjoying being chased by the tusker.

Even as the Supreme Court has ruled that elephants have the first right on the forest, the popping of incidents like these suggests that the message hasn’t reached the people in the rural belt who reside close to the forests.

What’s more worrying is that government data reveals many people in Odisha have been attacked or trampled to death while trying to get a snap with the wild animals, but no lessons learnt as yet.