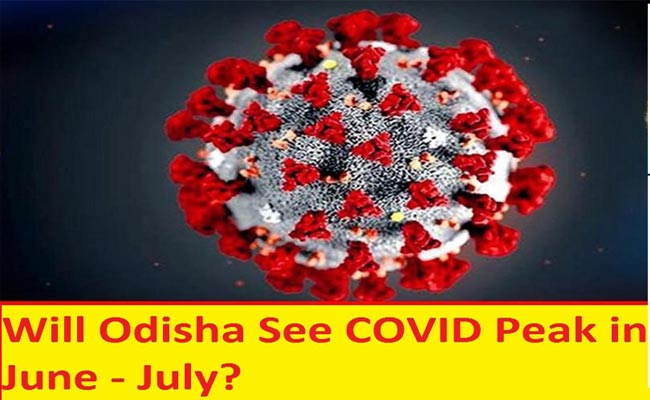 Bhubaneswar: In Odisha, the month of May is only the beginning of COVID-19’s uptick phase. Come June and July, the peak corona picture of the State will be on full display.

However, the cheering part of Odisha COVID story is the Corona curve will anyway go flat from August. And sunset of Coronavirus on the Odisha horizon looks a strong probability by the festive season of October.

But before that, the corona curve is projected to go berserk in Odisha. The projected peak numbers look numbing and also overwhelming. In June and July, Odisha is projected to record total peak corona infections to the tune of a mind-boggling 46.22 lakh! The number projected is around 10 per cent of total population of the State (4.5 crore). 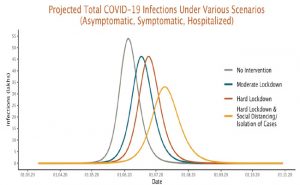 The scary COVID peak projections for Odisha have been estimated by no lesser mortals. This has been put forth by a joint research team of John Hopkins University, Princeton University and Centre for Disease Dynamics Economics & Policies. The joint model is a SEIR model, which has taken into account the population in Odisha who are infected, recovered, exposed  and/or are prone to COVID-19. The model has projected the scenario for Odisha based on the data for the month of April, and was published in the same month.

As per the details of the study, the model puts that the total base line projections of total corona infections in Odisha at a massive 53.905 lakh.

But the peak infection numbers in June and July will be around 46 lakh, as the model has projected total infections by taking into account the R naught (R0) value for Odisha during hard lockdown as 1.5 and assuming it to touch 2.4, post moderate relaxations in the lockdown.

In simple words, the study says post moderation in lockdown, one infected individual will infect more than two others, which will then trigger the geometric progression of COVID transmission in Odisha.

But the peak hospitalisation requirement has been estimated at a colossal 63,331 (average value).

However, when Odisha government has only 5,493 COVID beds, the peak projected hospitalisation requirement of over 63,000 for the State is simply numbing. This is a figure that has the potential to wilt down the health infra of Odisha.

In a related but big development, Odisha government today decided to limit the mandatory institutional quarantine days to mere 7 days from 21 days earlier. The back-tracking is mostly seen as the sheer number of returnees that overwhelm the quarantine infra created in the State.

As on today nearly 2.5 lakh have returned to State, and another equal numbers are waiting for their turn to return.

When such is the pressure on Odisha’s health infra, and as the hard lockdown today was moulded to a moderate one, the fear of COVID spread to rural Odisha looms large.

This is not a mere hunch. Only recently, Union Health Minister Harsh Vardhan had spoken to the health ministers of emerging hotspot states – UP, Bihar, Odisha and West Bengal. Since majority of Shramik trains end up in these 4 states, Vardhan had asked the states to chalk out a strategy to prevent COVID transmission to the rural areas.

Sources say health Minister Vardhan had even enquired about the COVID containment strategy straight from the DMs of the districts like Ganjam and Jajpur .