It remains a mystery that the New Bhubaneswar Railway Station has not yet been put to meaningful use. A full-fledged satellite station for Bhubaneswar is absolutely necessary. The city has expanded towards the north and the New Station should have better access and amenities without further delay.

Today Bhubaneswar is perhaps the only state capital in the country where the city’s main Railway Station building is not visible even from a distance of two hundred meters; perhaps it is the only railway station building of any capital city without a concourse. The clock here has moved backwards. The station building when it was built decades ago was a piece of soothing architecture with an open space with a garden that hosted two statues of national leaders. Then came a grotesque looking building in front, that hosted the ticket booking counters and the area went adequately messy but waited for complete defilement till an ugly looking structure housing a Sulabh Sauchalaya was constructed at the most prominent place in front of the station building. The degradation, however, was not yet complete.

The smart city project added further misery to the area. The Railway Station Multimodal Hub Project was initially planned in 2015 and it got government’s in-principle nod in 2016. It stipulated creation of transit-oriented smart development project that was envisaged as trigger for development of planned central business district for Bhubaneswar. There was to be a new terminal building for the Railway Station, a city bus terminal, public car park, dedicated pick up and drop off lanes for taxi, auto-rickshaws and other vehicles, innovative elements like theatre plaza, art plaza and children’s plaza along with food courts. The cost of design by Singapore-based firm Surbana Jurong was Rs 8 crore. While the Railways would lay two additional lines and one platform, the State Government would build the multimodal hub at an estimated Rs 840 crore under the Smart City project.

Indian Railways and the Odisha government signed a Memorandum of Understanding in September 2019 for the redevelopment of Bhubaneswar railway station. As per the agreement, the multi-modal transport hub was expected to be completed in 30 months providing a new terminal building for railway station, city bus terminal, public car parking and allied public utilities. Chief Minister Naveen Patnaik hailed it as a historic occasion and viewed it as one of the biggest milestones to transform Bhubaneswar railway station into a world class railway station with a multimodal hub. It would be the first transit-oriented smart development project with a blend of contemporary designs and traditional Kalinga architecture. 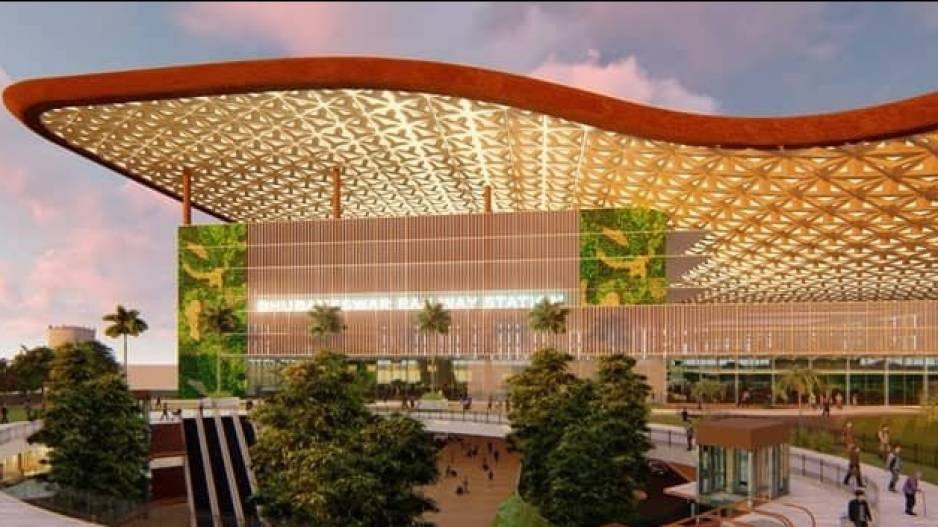 An artist's impression of the new look of Bhubaneswar Railway Station that was expected to become a reality after redevelopment.

The project however didn’t move. In a working style that reminded of Muhammad bin Tughlaq, the executing agency of the smart city project only pulled down a few structures without any preparedness for placing better alternative facilities. The open space in front of the Railway Station is now an area of squalor and a zone of wilderness. Its state of neglect is offending. The National Flag on the high-mast close to the entrance of the station building is barely visible outside. That this unacceptable situation has been prevailing for some years around the main railway station of a city which hosts the headquarters of a Zonal Railway speaks volumes of insensitivity of both the state government and the Railways.

While the grand project of the smart city authorities for the area remained stuck, many railway stations in the country got transformed into world class facility. Rail Ministry reportedly has ongoing redevelopment work at 123 railway stations. Habibganj and Gandhinagar railway stations are envisioned to be the world’s first airport-like stations. A total of Rs 50,000 crore, according to present estimates will be required to renovate and redevelop these 123 railway stations. The renovation work has already started at Habibganj, Gwalior, Chhatrapati Shivaji Maharaj Terminus, Nagpur, Ajni, Safdarjung, New Delhi, Ayodhya, Gomti Nagar, Gandhinagar, Sabarmati, Tirupati, Nellore, Amritsar, Ernakulam, Dehradun and Puducherry stations.

The MoU was signed between the East Coast Railways and Bhubaneswar Development Authority (BDA) in September 2019, but tender for the project was not invited in two years. Besides, the State government’s approval of the proposed expenditure of Rs 840 crore wasn’t forthcoming. Time overrun led to cost overrun. Cost escalated to Rs 1,075 crore, yet no tangible progress was made. To avoid further delay, Railways decided to do the development of the railway portion on their own.

Chairman of the Railway Board during his visit to the railway station in October confirmed that the Railway Station would be developed into a World Class facility and Railways were coordinating with Bhubaneswar Development Authority. He also informed that Rail Land Development Authority (RLDA) will work out the Railway portion of the developmental work and rest of the work will be done by BDA. He assured that action was being taken to complete this work at the earliest.

This development notwithstanding, apprehensions still persist. The ability of the Smart City Authorities to arrange funds for over Rs 800 crore is extremely doubtful. Even if funds would be available, loan servicing would pose serious problem. Present economy of the city offers little opportunity for large-scale commercial space use. We need to keep the plan for seamless connectivity to commuters for better times and must finalise a feasible plan immediately. 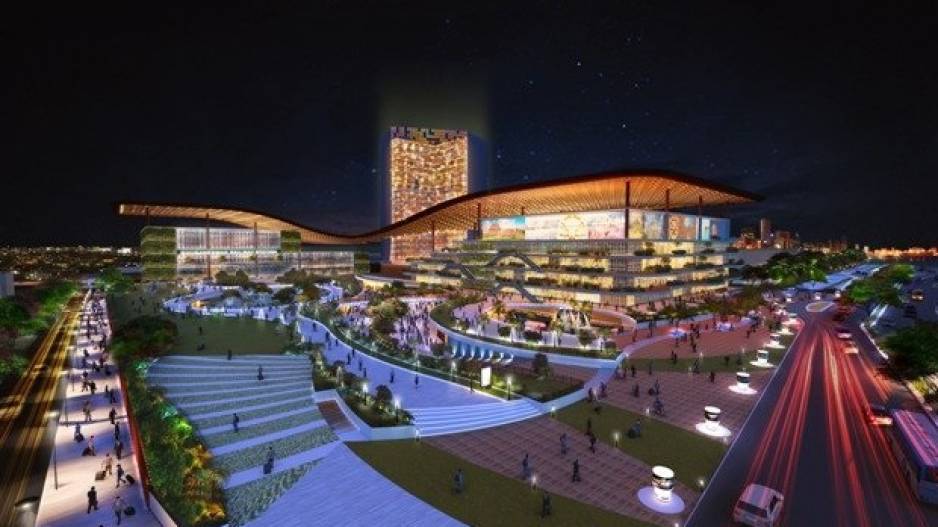 An artist's impression of the new look of Bhubaneswar Railway Station that was expected to become a reality after redevelopment.

Smart City component of the plan should be delinked from the programme of developing the Railway Station and this component be kept on hold. Railways should develop new lines and a new platform and build an adequate station building keeping future needs and Kalinga architecture in view. State government should make available adequate land up to the Janpath in front of the Railway Station to the Railways for developing a concourse. Railways should provide an air concourse connecting both sides of the railway station as well.

It remains a mystery that the New Bhubaneswar Railway Station has not yet been put to meaningful use. A full-fledged satellite station for Bhubaneswar is absolutely necessary. The city has expanded towards the north and the New Station should have better access and amenities without further delay.

More From The Author | Why Odisha Candidates Struggle To Qualify For Civil Services?