According to the ICMR study, the mean age of the suspected cases for dengue was 30.3 years (95% CI 29.5–31.1). Also, the study found that males were more commonly affected than females. Studies show in Odisha, the most common age group affected by dengue infection is 11– 20 years, says ICMR

Govt plans to repurpose CoWIN for its Universal Immunisation Programme

When the thick tail of Covid-19 still keeps the cases up in the Capital City, another deadly virus seems to be on the prowl. As the cases of Dengue are on the rise in Odisha, the State Capital alone bears almost half of over 225 cases detected to date.

What has worried the State Public Health department is, the dengue cases in Bhubaneswar has grown by nearly 3000 per cent in July. Such an explosive growth of a viral disease hint at the looming epidemic threat over the City, feel ICMR microbiologists.

As per an ICMR study during the period of 2010-19, though the cases of the viral disease had been reported from all the districts, the hub has been the twin city of Bhubaneswar and Cuttack. And sticking to its dubious credentials, the State Capital is now shouldering almost half of the dengue cases in the State.

The ICMR study shows a district-wise outbreak of dengue during the period of 2010-19 (see the image given below). 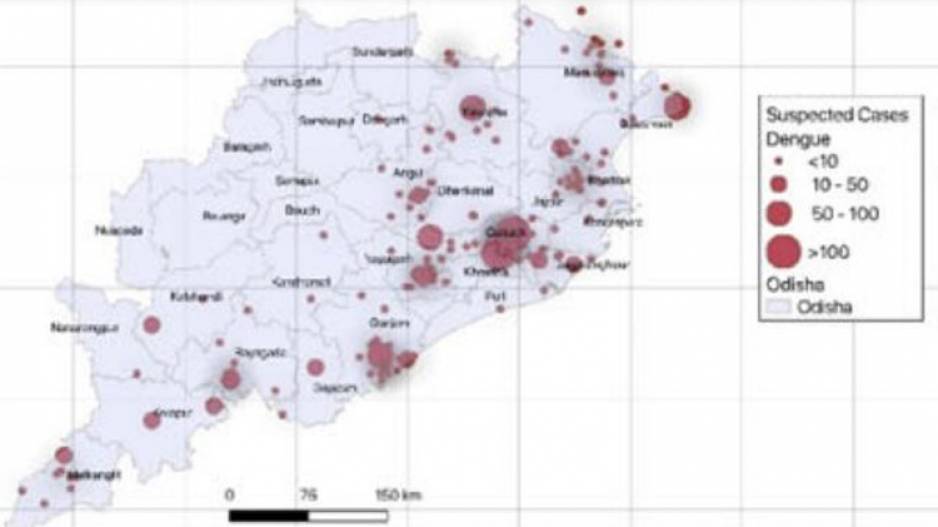 Dengue outbreak happened in Odisha for the first time in 2010. Odisha figured as the top -4 dengue hit states in the year 2016. This had been the worst year as the State had recorded the highest of around 8,380 cases and 11 deaths. Whereas, the year 2020 had recorded the lowest dengue cases (496) and nil deaths in the State.

However, the situation in 2021 looks completely different. The news of the sudden surge in dengue cases in the month of July in Odisha has earned the State a dubious distinction as it went on to figure in the US-based Centre for Disease Control and Prevention's (CDC) dengue map for South Asia. (see the main image).

The data available with National Vector Borne Disease Control Programme shows that a total of over 7200 dengue cases throughout the country to date.

Except for Chhattisgarh, now all the Covid-19 hotspot states in the country have turned the Dengue hotspots too. Sample the states below.

Delhi is not on the list because the monsoon has covered the national capital only recently. Moreover, the infection period in Delhi has been from August - October.

Despite having fewer cases, Odisha has made it onto the CDC map because the spurt of cases in July in Bhubaneswar has been over 3600 per cent.

This Virus Catching Them Young

According to the ICMR study, the mean age of the suspected cases for dengue was 30.3 years (95% CI 29.5–31.1). Also, the study found that males were more commonly affected than females.

Moreover, it has been mentioned that peak dengue time in Odisha is July and September.

How To Differentiate From COVID19?

Symptom number 3 is specific to dengue only. If one has this symptom, then go for the Dengue test at the earliest.