Taking to her Instagram stories, Sadia shared the picture with Aryan and wrote, “Throwback to the New Year’s Eve.”

Superstar Shah Rukh Khan’s son Aryan Khan has been hogging the limelight ever since his arrest in the controversial drugs scandal. However, the star kid came out clean and is all set to make his big debut in Bollywood.

Meanwhile, the junior Khan who ringed in the New Year with friends and sister Suhana Khan was spotted hanging out with a Pakistani actress. Now, a snap of the two posing for a picture has been going viral on social media.

The actress is none other than the gorgeous Sadia Khan. Taking to her Instagram stories, Sadia shared the picture with Aryan and wrote, “Throwback to the New Year’s Eve.” 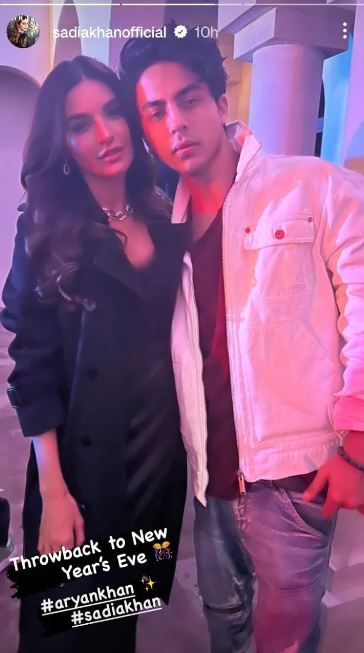 Aryan can be seen in a maroon T-shirt and blue denim with a white jacket while Sadia is dressed in all black dress and a black overcoat. The two look adorable together as they pose close to each other for a picture.

Earlier, pictures of Aryan Khan partying with Nora Fatehi had gone viral. The pictures had raised speculations that Aryan was dating the dancing diva. However, there has been no official confirmation in this regard.

On the work front, Sadia Khan, 35, is known for her role in popular Pakistani drama Khuda Aur Muhabbat and Emaan. She was also seen in the titular role in TV show Maryam Periera in 2019.

On the other hand, Aryan is all set to make his debut as a writer and has completed writing the script for his first project. The project will be a web series that will also be directed by Aryan Khan and produced by his father’s Red Chillies Entertainment.