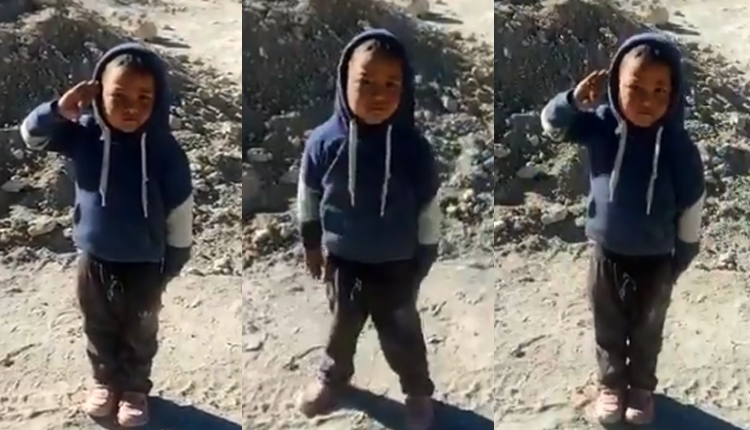 In what can be called a powerful demonstration of values and a symbol of honour, a little boy kid from Leh village stood saluting on seeing the armed forces pass by in a gesture of respect. In footage that emerged out of Indian Forest Officer, Susanta Nanda’s account, a little boy clad in a blue hoodie and pink shoes froze movement and was seen saluting the army officers. “Budding soldier of future India,” Susanta wrote in the caption to the 14-second video.

For The First Time In 2 Years, Petrol Price Breaches Rs 83 Per Litre; Diesel Over Rs 73

The footage was originally shot in Chushul village, Leh by a security forces personnel after he spotted the young boy paying respects to him. In the clip, the officer can be seen briefly approaching the boy and then giving commands, to which, the boy complies. The officer in the footage can be further heard teaching the child about the correct standing position. The little boy takes the instructions and proudly makes an open palm gesture with confidence. The kid attracted an agglomeration of lauds for his brevity, as he stands middle of the road, saluting.

“His observance at this age is just awesome,” a commenter pointed out, adding, that the kid was thoughtful about paying tribute to the officers and understood the armed forces protocols when he was being given commands. The footage earned the little boy an onslaught of applauds and kisses in the comments thread, as many said that the boy appears to be the future soldier who would be saluted by the nation one day. “Welcome to my hometown, Leh Ladakh. This is common amongst our kids, we salute any uniformed personnel crossing paths. Jai Hind,” a commenter from the region wrote. “Real Citizen,” one other said, “Respect and Love Soldier,” added another. “Salute my Lil one! Jai Hind” wrote one other.

This is a real Indian Soldier! The future of India! https://t.co/KkRmHPL71s

The nation is in safe hands!! Love the charm of this kid. https://t.co/iIp6q8pVQU

Jullay and welcome to my hometown, Leh Ladakh. This common amongst our kids, we salute any uniformed personnel crossing paths. Jai Hind.