Fighting COVID-19: US is very close to a vaccine, says Donald Trump 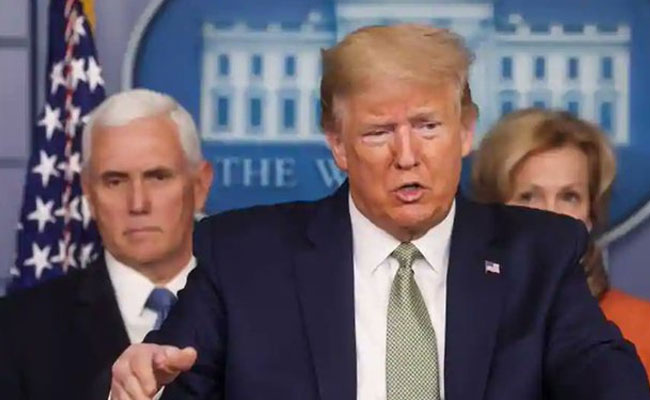 Washington: US President Donald Trump while addressing the daily White House coronavirus briefing said “we are very close to a vaccine”, after noting vaccine trials taking place in the US, Germany, the United Kingdom and China.

He was joined by Vice-President Mike Pence and Deborah Birx, the White House coronavirus taskforce co-ordinator, the BBC reported.

“We have a lot of great, brilliant minds working on this,” he said.

“Unfortunately we’re not very close to testing because when testing starts it takes a period of time, but we’ll get it done.”

Dr Anthony Fauci, the US government’s top infectious diseases expert, had previously said that a vaccine will likely take 12-18 months to be approved for widespread use. Most health experts also agree that it would take at least 12-18 months before a vaccine is ready.

After Trump, Vice-President Mike Pence said the data continues to show “promising signs of progress” in the US fight against coronavirus.

Major virus hotspots including the New York Metro Area, New Jersey, Connecticut, Detroit and New Orleans “all appear to be past their peak”, Pence said.

“Our only conclusion is that we’re getting there, America,” he added.

“If we continue these mitigation efforts in the days ahead… we do believe by early summer we could be in a much better place as a nation, with much of this coronavirus epidemic behind us.”

He says 16 states have released formal reopening plans so far.

Vice-President said that 4.93 million coronavirus tests have been completed across the US, adding that commercial labs surpassed 100,000 tests yesterday.

Pence says that he is “encouraged” by states’ “phased approach” to reopening their economies.

“We’re slowing the spread, we’re protecting the most vulnerable, we’re saving lives and every single day we are one day closer to opening up America again,” Pence said.

Sunlight kills COVID-19 while warmer temperatures and humid weather significantly damage the virus, measured in terms of the virus’ half-life or the time it takes to cut its potency in half, according to the latest breakthrough research from the US Department of Homeland Security’s most advanced biocontainment lab, released at the White House here on Thursday.

The coronavirus outbreak in the US has killed nearly 50,000 Americans and infected more than 860,000 till date. Research around the effect of temperature and humidity has been gaining traction for weeks, these are the most downloaded papers on research websites but this is the first time the US government has put an official stamp on initial results of temperature tests on COVID-19.

Also Read: Coronavirus Will Be With Us For A Long Time: WHO Chief

“Our most striking observation to date is the powerful effect that solar light appears to have on killing the virus, both on surfaces and in the air. We’ve seen a similar effect with both temperature and humidity as well. Increasing the temperature and humidity or both is generally less favourable to the virus,” Bill Bryan, chief of the science and technology directorate at the US Department of Homeland Security, said.

In a room at 70-75F temperature with 20 per cent humidity, the half-life of the virus is about an hour, according to Bryan. “But you get outside and it cuts down to a minute and a half, very significant difference when it when it gets hit with UV rays,” he said.

According to the same research, the virus’ half-life on surfaces reduces dramatically with a combined increase of temperature and humidity.

When the temperate is kept constant at 70-75F and only the humidity is cranked up from 20 per cent to 80 per cent, the virus’ half-life is shown to crash from 18 hours to 6 hours. If the temperature is increased to 95F, the half-life sinks to barely 60 minutes.

Bryan said this testing was done at DHS’ advanced biocontainment lab in Maryland, just outside the national capital.

Pointing to charts with data from experiments on the COVID-19 virus, Bryan said the virus half-life plunges “drastically” with exposure to higher temperatures and even minimal exposure to humidity.

Bryan said the DHS biocontainment lab is the only one in America that has the capability to do the kind of testing that has led to the research on the virus’ UV and temperature tolerance.

Bryan explained the mechanics of the COVID-19 temperature tolerance experiment in simple terms. He said the virus was first locked into a 5-gallon bucket and suspended in the air inside. “We’re able to take a particle of a virus and suspend it in the air inside of this drum and hit it with various temperatures, various humidity levels, multiple different kinds of environmental conditions to include sunlight. And we’re able to measure the decay of that virus while it’s suspended in the air. This is how we do our aerosol testing.”

“While there are many unknown links in the COVID-19 transmission chain, we believe these trends can support practical decision making to lower the risks associated with the virus,” Bryan said.

The DHS team has also tested the effect of bleach and isopropyl alcohol on the virus, “specifically in saliva and respiratory fluids”.

Novel coronavirus has not been manipulated or constructed in labs: WHO