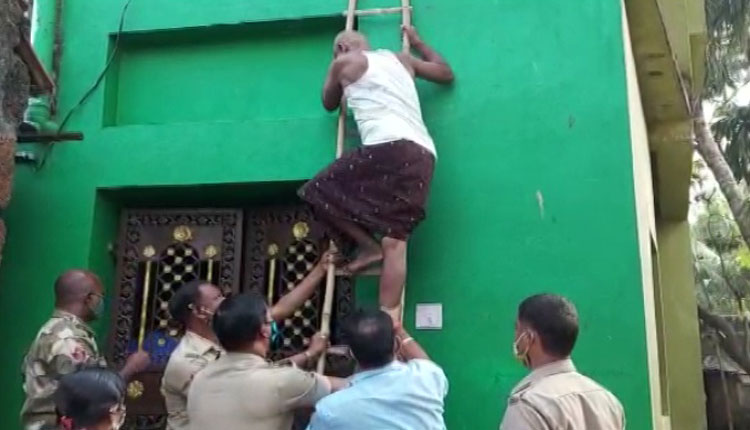 Bhubaneswar: An elderly man, who was allegedly locked in the bathroom of his house for 8 days by his son and daughter-in-law, was finally rescued by the police on Thursday. The shocking incident has been reported from Palasuni area on the outskirts of the Smart City.

Even hours after his rescue, the shocked elder, believed to be in his early 70’s was unable to speak and narrate his ordeal in confinement for over a week without food or water.

Early on Thursday, neighbours informed police after they saw the old man crying for help from the balcony of his house. On getting the SOS call, a police team along with the old man’s daughter reached the spot.

Initially they knocked on the door of the house, but got no response. Finally, they rescued the old man from the balcony using a ladder.

The visibly shaken victim was found wearing a gamcha (loin cloth) and a vest while the signs of hunger and pain was writ large on his face.

Though the petrified man could not speak, police allegedly learnt that he was locked in the bathroom by his son and daughter-in-law for about eight days. On Thursday morning, he somehow managed to get out of his confinement and walk up to the balcony of the house to seek help.

“My brother had locked my father in the bathroom for nearly 8 days. They had also not given him any food. On getting information about the incident from neighbours, I took the help of police,” said daughter of the elderly man.

Meanwhile, the daughter-in-law dismissed the allegations of torture but she refused to say anything on camera.