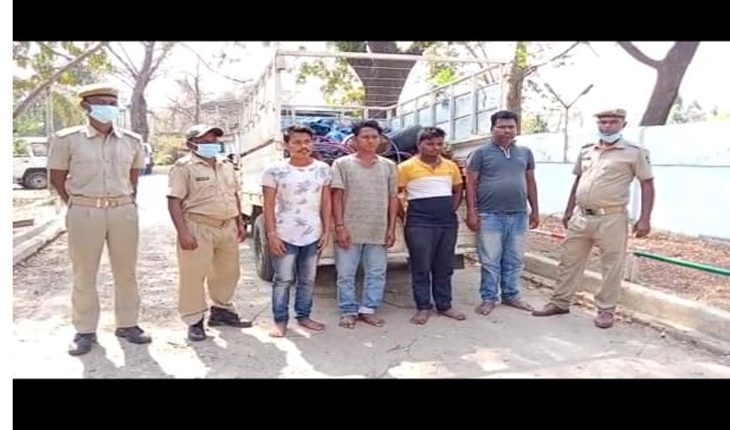 Kalahandi: If you think criminal gangs only loot cash, valuables or rob vehicles on the highway, here is a gang which will prove you wrong.

On Tuesday, the Kokosara police in the district rounded up a gang of four who specialised in looting electricity poles waiting for installation. They would cut the long iron poles into smaller pieces and make a killing by selling them in scrap markets at distant places.

The members of the gang were identified as Sabeer Khan (from Ghulipali village of Bargarh), Debraj Majhi (from Laxmidungari pada village of Sambalpur), Saheed Hussain and Dhanesh Sikka (from Bargarh).

Police said that six electric poles had been kept at a godown at Behera village for installation by L&T Construction Power Transmission And Distribution company. The theft came to light on February 19 and the local police was subsequently informed.

The Kokosara police launched a search operation to trace the culprits.

Narayana Nayak, SDPO, Dharmagarh said, “We picked up the foursome and subjected them to intensive questioning. They admitted to the crime and said they had taken away the poles weighing around 3900 kg,” he said.

The gang, Nayak said, had cut the stolen poles using gas cutters, before transporting the cargo to Bargarh in a Mahindra Bolero pick-up van with a fake number plate and documents.

The jeep was subsequently confiscated by the police while searches are on for two more members of the gang, including the driver of the jeep, he added.

During their questioning, the police have learnt that they were involved in a similar case under the Amapani police station in the past.

They have been booked under relevant legal provisions and forwarded to the court for appearance, Nayak said.

1 Killed, Over 30 Injured In Separate Road Accidents In Odisha