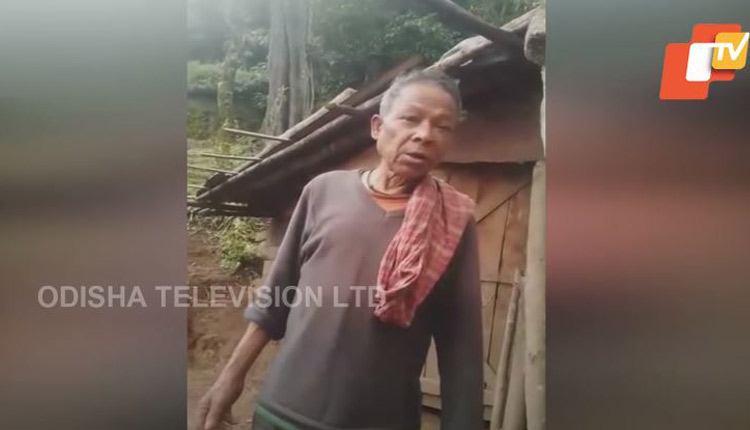 Gajapati: It was hard to believe for the family members of Jagpati Kargi. But that is how life is – uncertain and full of surprises.

Jagpati, a native of Rayagada block in Gajapati district went missing nearly two decades back. Nobody exactly knew where we went and as years passed by and he did not return, many even questioned whether he was alive.

But like the story of a revenant, fate brought Jagpati back to where he came from. Like discovery of many astonishing stories during the extraordinary time of the pandemic, Jagpati was recently found living a solitary life in the foothills of Lower Subansiri district in Arunachal Pradesh.

Neither he remembers nor does anyone know the exact year when he came here and how the man who left home abandoning wife, children, relatives and all worldly things, landed in the inhospitable terrain of the North-Eastern state.

It is said that he collected woods, went for hunt, worked in nearby areas just to survive. And times flew by until the arrival of man Friday.

A local teacher Rubuama met Jagpati in 2003 and started to see him regularly to provide foods and ration. All went smoothly, but the COVID19 pandemic which has been festering around the world also reached the hills. Without any job in hand, it became hard for them to survive.

Rubuama posted a video of Jagpati on social media and said, “I have been seeing this man since 2003. He has been living in the hillside of Lower Subansiri district. He is from Odisha’s Gajapati district.”

Soon after the video went viral, former Gajapati SP Sarah Sharma came to know about him from her JNU alumni group and helped coordinate his family. She contacted OTV local correspondent from Gajapati to ascertain the identity of Jagpati.

When OTV reached Jagpati’s family at Abasing village, they could barely believe their eyes.

“My brother left home when I was young. He should return now as we miss him. We would live together happily,” Jagpati’s brother said after recognising him from the video.

Jagpati’s son who was not even born when he left home also expressed his happiness after seeing his father.

Sources said, Jagpati is being treated in an Arunachal Hospital and will be brought back to Odisha after the pandemic crisis.