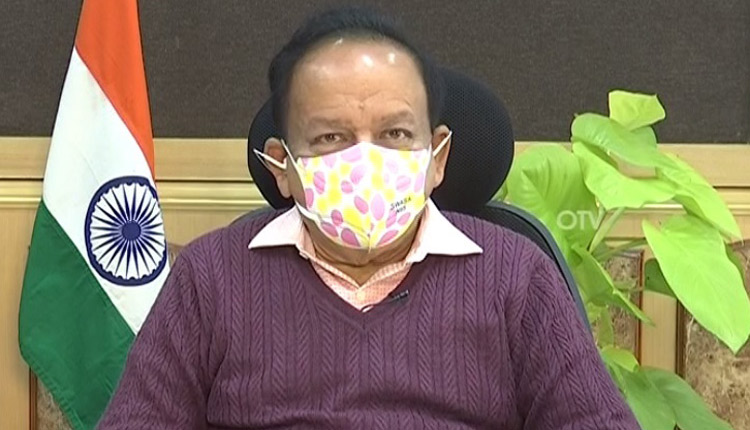 Bhubaneswar: The country’s vaccination war against novel coronavirus has entered a decisive stage. Very soon nearly half a dozen new range of vaccines will hit the market to lend depth to the ammunition of immunity against the COVID19 in the country.

“The vaccination in India has reached a crucial stage. As of date, Covaxin and Covishield have been delivered to over 1.66 crore people. The AEFI (Adverse Effects Following Immunisation) in the country as of date stood at a mere 0.00043 per cent. The country will see the roll-out of nearly half-a-dozen vaccines soon. Another 12 vaccines are in the pre-clinical trial stage.”

As per highly placed sources, ZyCoV-D (a plasmid DNA vaccine) will soon be launched in India.

However, the main theme of Dr Harsh Vardhan Foresight 2021 talk harped on the Atmanirbhar Bharat which showed its resilience to the world in combating the contagious ‘once in a life time’ pandemic.

“When many mathematical models on n-CoV2 have predicted doomsday for India citing the sheer density and size of her population and had even gone to predict that the country would witness a massive 300-400 mn cases and 6-7 mn deaths due to the contagious pandemic, the actual cases after 1.2 years stood at mere 11.7 million and fatalities stood at 1.57 lakh,” he outlined.

Putting the glare on Atmanirbhar Bharat again, Harsh Vardhan said, “in April 2020, the country had only 1 lab for Covid-19 testing, today we have around 2,399. Now, we are manufacturing 5-6 lakh PPE per day. A massive 5-10 lakh test kits per day are being manufactured in the country.”

Moreover, when a lot of controversies and political fishing had been done around one vaccine (Covaxin), the phase-III data released recently (that showed an interim efficacy of a high of 81 per cent) has silenced the critics in the country, said a smiling Harsh Vardhan. This is the Union Health Minister’s first public comment after the release of Covaxin phase-3 data.

He added that the vaccine policy of the Government of India has been uniform since the beginning, “There should be no compromise on safety, efficacy and immunogenicity of the vaccines.”

ON INDIA AS PHARMACY OF WORLD

“During the peak pandemic time, India had supplied Hydroxychloroquine drugs to around 250 countries. Similarly, the country has launched the ‘Vaccine Maitri’ programme to deliver made in India vaccines to its neighbouring and friendly countries. As of date, vaccines are provided to 21 countries as grants, and to over 36 countries under contact programme,” said Dr Harsh Vardhan.

ON INDIA’S POTENTIAL TO FIGHT PANDEMICS

The country’s potential to battle out such a highly contagious pandemic is evidenced by the instance of a student who had returned from Wuhan and had tested positive. The potential of the country is it could trace 162 contacts.

When questions on India’s capability to conduct tests were being raised, the numbers of over 1mn tests/day in the peak month of September 2020 tells the tale of the country’s potential to deal with the size of the pandemic like Covid-19, he emphasised.

“The WHO had announced about n-CoV-2 to the world on Jan 6, 2020. Within a week (by Jan17), the union health ministry had issued detailed guidelines to all states. In the shortest span of time, the country had set its extensive surveillance network – from the point of entry (at airports) to community surveillance at the ground level),” claimed Dr Vardhan.

ON RISE-IN TREND IN 5 STATES AND SECOND WAVE

The Union Health Ministry has categorically stated the consistent rise in cases of COVID in 5 states cannot be termed as the second COVID wave in India.

“It cannot be construed as the second wave because states like Maharashtra has been recording higher cases since the beginning of the pandemic. The rise is due to non-adherence to Covid-19 appropriate behaviour. Also, our scientists have clearly established that there is no link between rising cases and new strains,” the minister reasoned.

ON THE WUHAN LINK

The WHO has conducted a series of meticulous scientific studies in the ground zero at Wuhan. As of the date, there has been no such data to show that the virus is engineered at any lab in Wuhan, explained Dr Vardhan.

However, the Union Health Minister has laid a greater emphasis on diligent adherence to the ‘Social Vaccine’ – use of masks, maintaining 6-ft distance and hand washing – to keep the pandemic at bay, even as the country will have an intense vaccination drive to defeat the Covid-19.