Alia, Rashmika, Priyanka, Samantha And Their Craziness For This! #SeePics

Tattoos are not only a mere fashion statement for Alia Bhatt, Rashmika Mandanna, Samantha Akkineni, Priyanka Chopra stars, but have also emotional connections to the same.

Alia Bhatt, Rashmika Mandanna, Samantha Akkineni, Priyanka Chopra are some of the top actresses of the Indian film industry. Apart from their brilliant acting skills, these divas are known for their fashion choices.

Rashmika, Samantha, Alia and Priyanka are the hottest-looking divas who just astonish fans with their superb looks and mindblowing talents.

These divas are fashion icons and rock every look with élan and are trendsetters. They might be competitors, but they have one thing in common, i.e. their love for tattoos. These actresses have inked themselves and are often seen flaunting them.

Tattoos are not only a mere fashion statement for these stars, but also sometimes they have emotional connections to the same.

The Raazi actress Alia Bhatt is known for her acting skill and bubbly character. The 'Pataka Guddi' of Bollywood got herself inked right below her nape. 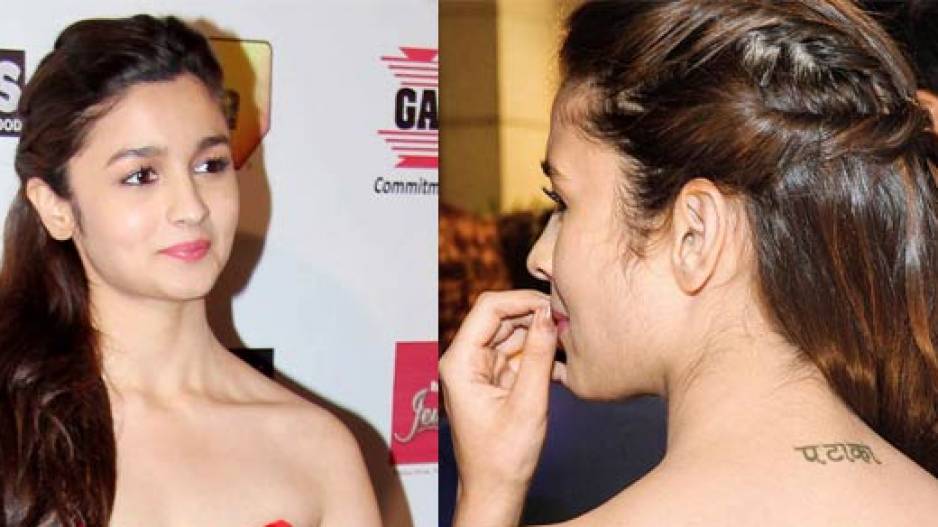 National Crush Rashmika Mandanna has inked an ‘irreplaceable’ on her right hand. Her tattoo means ‘that which cannot be changed.’ As per reports, Rashoo had inked the tattoo in 2018.

The actress, during an interaction session on social media, had also explained the meaning of the tattoo on fan requests.

"I am irreplaceable, you are irreplaceable. All of us are unique in our own ways and no one in your life can replace you with another person - is what the meaning of this tattoo is," she had said.

South Diva Samantha Akkineni is very fond of tattoos. She has inked three tattoos on her body which hold special meaning to her. While the first one is the Viking symbol, the second one refers to the title of her debut film Ye Maya Chesave and the last tattoo is her hubby Naga Chaitanya's name.

While Samantha Akkineni has got 'YMC' referring to her debut movie written under her neck, the actress has got her husband Naga Chaitanya's signature inked on her rib cage, which she had reportedly kept hidden and had finally revealed in an Instagram post.

She also has a couple of tattoos with her husband Naga Chaitanya- a Viking symbol in common on the lower part of the wrist. It means ‘create your own reality.

Global Star Priyanka Chopra has a couple of tattoos on her body which have special meaning to her. Priyanka's had her first tattoo on her right arm in 2012 to honour her father. The tattoo reads, ‘Daddy’s Lil Girl’ in her father’s handwriting.

She had revealed why she wanted to have the tattoo while promoting her memoir on The Tonight Show with Jimmy Fallon.

“I got this tattoo about a year or two before my dad passed, and I lied to him, and I told him I needed to write (his name) down because I wanted it for artwork for my album,” Chopra Jonas said. “He wrote it in his handwriting, and now I have it here with me.”

Recently, the Fashion actress got the pawprints inked on her right leg which she dedicated her pet dogs – Diana, Gino and Panda.

She was spotted a new tattoo inside her upper left arm.

Even though she has revealed the meaning behind it, fans believe that it is a map of Asia, dedicating to the place where is from while some believe that it is the map of Pangaea, the super-continent that existed before the seven continents were separated, per Live Science.