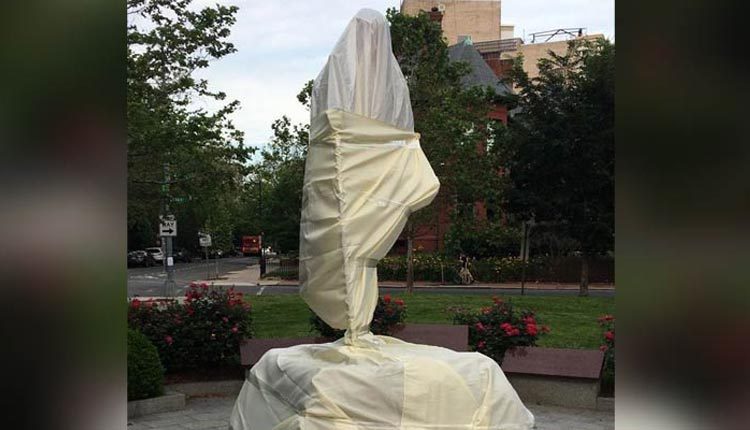 New Delhi: US Ambassador Ken Auster apologised to India after Mahatma Gandhi’s statue outside the Indian Embassy in Washington D.C. was vandalised by miscreants during the ongoing George Floyd protests.

“So sorry to see the desecration of the Gandhi statue in Wash, DC. Please accept our sincere apologies. Appalled as well by the horrific death of George Floyd and the awful violence and vandalism. We stand against prejudice and discrimination of any type. We will recover & be better,” tweeted Auster

So sorry to see the desecration of the Gandhi statue in Wash, DC. Please accept our sincere apologies. Appalled as well by the horrific death of George Floyd & the awful violence & vandalism. We stand against prejudice & discrimination of any type. We will recover & be better.

According to report, some unknown miscreants have vandalised a statue of Mahatma Gandhi outside the Indian embassy in the US with graffiti and spray painting, prompting the mission officials to register a complaint with the local law enforcement agencies.

The incident is reported to have taken place on the intervening night of June 2 and 3 in Washington DC.

The Indian embassy has informed the State Department and registered a complaint with local law enforcement agencies, which are now conducting an investigation into the incident.

On Wednesday, a team of officials from Metropolitan Police in consultation with the Diplomatic Security Service and National Park Police visited the site and are conducting inquiries.

Efforts are on to clean up the site at the earliest.

Vandalism of the statue of the apostle of peace comes during the week of nationwide protests against the custodial killing of African-American George Floyd in Minneapolis on May 25.

Several of these protests have turned violent which many times has resulted in damage of some of the most prestigious and sacred American monuments.

In Washington DC, protestors this week burnt a historic church and damaged some of the prime properties and historic places like the national monument and Lincoln Memorial.

One of the few statues of a foreign leader on federal land in Washington DC, the statue of Mahatma Gandhi was dedicated by the then Prime Minister Atal Bihari Vajpayee, in the presence of the then US president Bill Clinton on September 16, 2000, during his state visit to the US.

In October 1998, the US Congress had authorised the government of India to establish and maintain a memorial to honour Mahatma Gandhi on Federal land in the District of Columbia.”

According to the Indian Embassy website, the sculpture of Mahatma Gandhi is cast in bronze as a statue to a height of 8 feet 8 inches. It shows Gandhi in stride, as a leader and man of action evoking memories of his 1930 protest march against salt-tax, and the many padayatras (long marches) he undertook throughout the length and breadth of the Indian sub-continent.

The statue, the design of which was created by Gautam Pal, is a gift from the Indian Council for Cultural Relations (ICCR). The pedestal for the statue of Mahatma Gandhi is a block of new Imperial Red also known as Ruby Red a block originally weighing 25 tonnes reduced to a size of 9’x7’x3’4″. It now weighs 16 tonnes.

US states clamp down on protests against George Floyd’s death