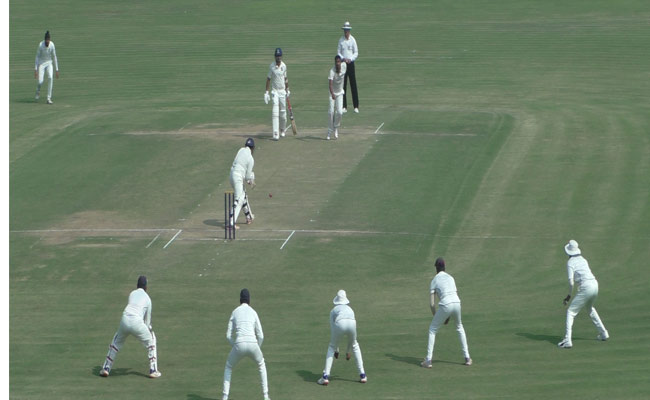 Cuttack: Despite a top order collapse, Bengal team is eyeing to post a gigantic score against Odisha in the ongoing Ranji trophy quarterfinal at DRIEMS ground in Tangi, Cuttack.

Put into bat by Odisha, Bengal suffered a top order collapse and lost wickets at quick succession. The top order batsmen were seen struggling against some superb bowling by Odisha pacers- Basant Mohanty and Suryakant Pradhan.

However, Anustup Majumdar and Shahbaz held their ground and steadied the Bengal innings. Majumdar went to score a ton and remained unbeaten at 136 runs (194 balls) at the end of the day’s play. Majumdar got adequate support from Shabaz at the other end. Shahbaz was also unbeaten at 82. Bengal ended the day at 308/6.

For Odisha, Suryakant Pradhan and Pratik Singh Chouhan were the pick of the bowlers as they scalped two wickets each.

It is pertinent to mention here that Odisha made into the quarter finals of the Ranji Trophy tournament after a gap of three years. Odisha team led by skipper Subhranshu Senapti finished second in Group C with 38 points. Odisha was just a point behind Jammu and Kashmir which was the table topper with 39 points.

Amit Shah To Attend EZC Meet In Odisha On Feb 28