OTV Video On Child Servitor Inside Aradi: Protest Over Media Coverage Criticised In All Quarters 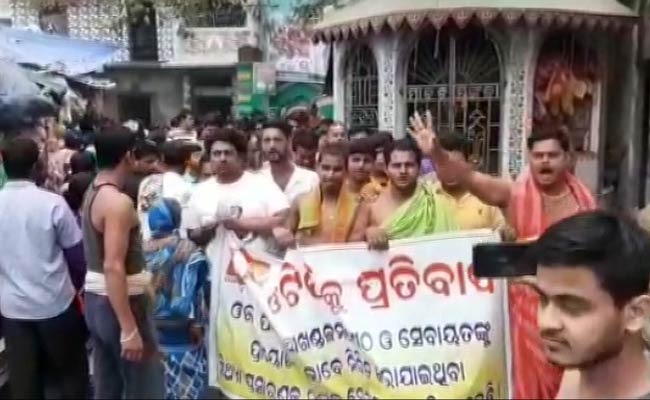 Bhadrak: Spreading false information with the malicious intent of defaming someone is neither acceptable, nor should be encouraged. A case in point is the recent protest in Bhadrak district against Odisha Television Limited (OTV).

OTV had shared a video on its social media platform as ‘Mu Chuin Gosein’ where a small boy (servitor) is seen chanting hymns on Shivratri at Aradi, a famous Shiva shrine. The video was posted to show how even a small kid recites shlokas like an experienced priest. However, though OTV’s objective was noble, there has been an attempt to give the video a different colour and deliberately misinterpret its contents.

Some servitors of the shire alleged that the video was sponsored. The boy was given money by the cameraperson of OTV to say such things, the servitors alleged. “The 7-year-old boy stammers while speaking. He was just sitting at the temple, but he was given Rs 100 and the video was then shot,” alleged a servitor, Arta Bandhu Padhy.

When such videos emerge, it shows the servitors in a bad light and sparks anger, said another servitor of the Baba Akhandalamani Temple, Gadanan Aradi.

However, Additional SP of Bhadrak Bikash Chandra Dash, who was at the spot during the entire shoot said, “I found the boy interesting and even spoke to him. There was nothing sponsored and there was no money exchange.”

Though the intention of OTV behind sharing the video was not to defame any servitor or anyone, it is believed that some people with vested interests are spreading the misinformation to defame OTV. Locals have strongly condemned such sponsored protests.

“By politicising the issue, slogans were raised against OTV. It’s unfortunate and condemnable,” said a lawyer, Gadadhar Bala adding ‘truth hurts everyone’.

“Why should media go for sponsored news? If CCTVs are installed in temples, many such incidents will come to light,” said another lawyer, Juga Jyoti Behuriya.

The administration should ensure that no minor children are engaged in such activities, he added.

“There are several servitors at the temple who are educated and good mannered. I request those spreading such things to stop as it will belittle the temple’s image,” said Sukant Sahoo, a resident of Chandbali.