Bhubaneswar: Ever imagined about the post-pandemic period or how stress-free people’s lives would be once these grim events bid adieu? The way this virus has spread has hit everyone harder than expected, on all fronts.

Amid such circumstances, the recently released India Happiness Report 2020 based on five different components of happiness along with the impact COVID-19 has had on happiness, presented the overall rankings of 28 States and 8 Union Territories elucidating how people have adapted to such an uninvited crisis.

In the happiness rankings of States and UTs, Mizoram (with a score of 3.57) topped the chart followed by Punjab, and Andaman and Nicobar Islands while Odisha, Uttarakhand and Chhattisgarh stood at the bottom three, the survey conducted by country’s leading management strategists between March and July 2020 revealed.

With a happiness score of 3.25, Odisha ranked 34 among all States and UTs, which indicates people here are less happy in comparison to others.

Among the big states, Punjab, Gujarat and Telangana are in top-3 in happiness rankings whereas Mizoram, Sikkim and Arunachal Pradesh occupy the top-3 positions among smaller states. The survey put Andaman and Nicobar Islands, Puducherry and Lakshadweep among top three in happiness rankings as far as UTs are considered.

For the India Happiness Report 2020 prepared by Prof Rajesh K Pillania, a questionnaire was developed and different components of happiness were taken into consideration.

The five components of happiness used in the report include work and related issues such as earning and growth; relationships including family and friends; physical and mental health; philanthropy including social concerns; and religious or/and spiritual orientation. Because of the impact of COVID-19, it has been considered as the sixth component. 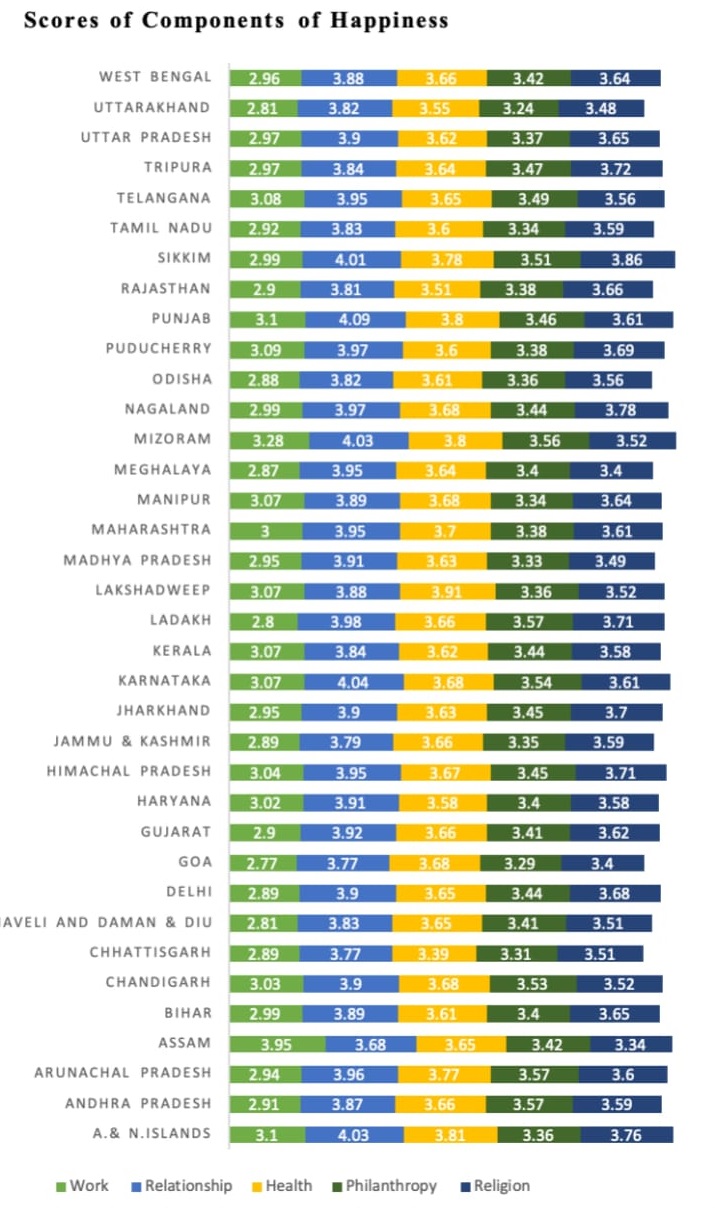 A total of 16,950 responses were collected from all over the country consisting more than 400 responses from each State and UT for this first happiness survey in India.