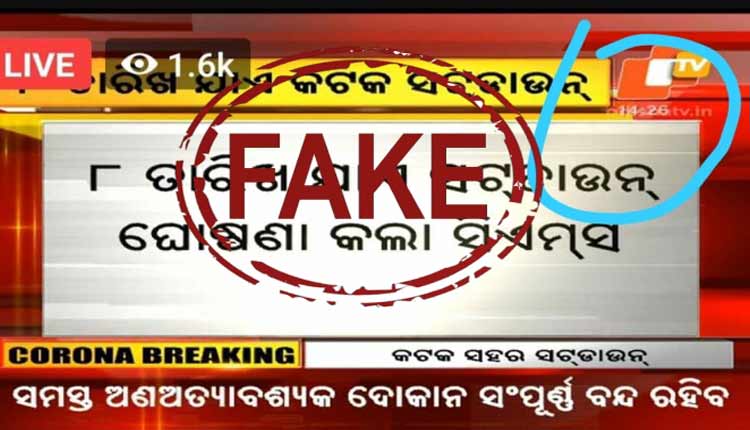 Bhubaneswar: Once again a piece of fake news claiming COVID-19 shutdown extension in Cuttack was found circulating on social media on Monday. Though Cuttack Municipal Corporation (CMC) was quick to come up with a clarification stating that it is a ‘HOAX,’ many social media users and observers see this phenomenon quite prevalent to be termed as a deliberate attempt not only at maligning the image of a particular news organisation, but also the whole sanctity of media.

#FakeNewsAlert Don’t believe this ‘FAKE’ forwarded message on #Shutdown extension! There is NO such official order extending the shutdown in #Cuttack city (CMC Area). pic.twitter.com/sujp2o3EP4

It is not for the first time that OTV graphics and logo have been misused for such fake news regarding shutdown during COVID-19 pandemic.

Coming across such a morphed & fake piece of news, the Cuttack Municipal Corporation (CMC) today tweeted, “Don’t believe this ‘FAKE’ forwarded message on #Shutdown extension! There is NO such official order extending the shutdown in #Cuttack city (CMC Area).”

On July 23, a false news snap shot with OTV logo claiming arrest of three individuals from Bhubaneswar for sharing fake messages about a flour brand being infected with COVID-19 virus had gone viral.

This picture carrying OTV Twitter handle logo is FAKE. We request our viewers not to believe/forward/share such FAKE news

OTV is in the process of tracking the source of such fake pictures & action will be taken with help of police against such mischief mongers pic.twitter.com/s1NSxuRdUk

#FakeNewsAlert : This news plate being circulated with OTV logo is fake. We would request our viewers not to believe in such fake news or forward it to anyone.

Anyone found peddling & circulating such fake news will be traced and action initiated with help of police pic.twitter.com/J03lL8MATf

On May 2, two youths were detained by Police at Buden Police Station in Bargarh district for spreading rumours regarding the spread of COVID-19 by posting fake news using OTV logo & graphics on social media.

OTV has continuously alerted its users & subscribers not to believe/forward/share such fake news. At the same time, OTV is making every effort of tracking the sources of such fake pictures & news and has and will be initiating action with the help of police against such mischief mongers.

Bhubaneswar Gets Another COVID Hospital As Cases Cross 2K Mark