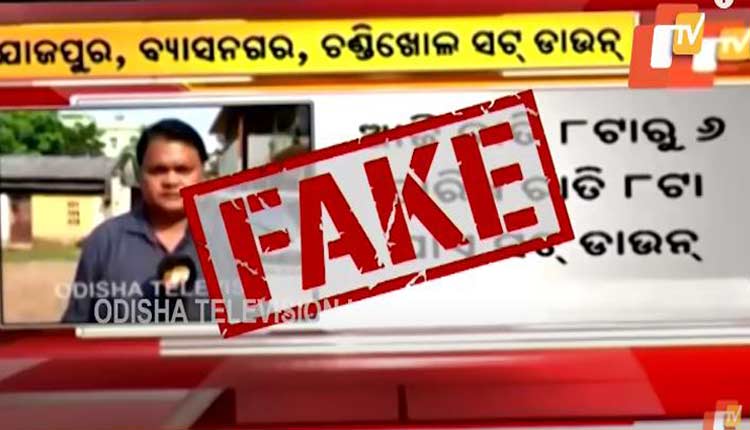 Bhubaneswar: A fake news prepared using OTV logos and graphics regarding shutdown in some areas of Jajpur district has been found doing rounds on social media platforms.

The report claimed that shutdown has been announced in Byasanagar and Chandikhol areas of Jajpur from June 30 today 8 pm to July 6, 8 pm in view of Covid-19 pandemic.

OTV has issued a clarification that the report is false and no such news has been aired by the news channel.The graphics of an old news item aired by OTV was craftily edited and used in the fake news.

The news channel appealed its readers not to believe in such fake news and not forward the news to any individual or receive it on their WhatsApp and other social media platforms.

It may be mentioned that spreading of such fake news during the Covid-19 pandemic is a punishable offence under the Epidemic Act.

This is not the first time such misinformation was spread using name of OTV.

Similarly, Commissionerate Police had detained a youth on charges of circulating fake news on Odisha Chief Minister Naveen Patnaik’s health by misusing the logo of OTV on social media in August, 2019.