Elephant Menace In Odisha: MLA Made To Do Walkathon By Irate Villagers 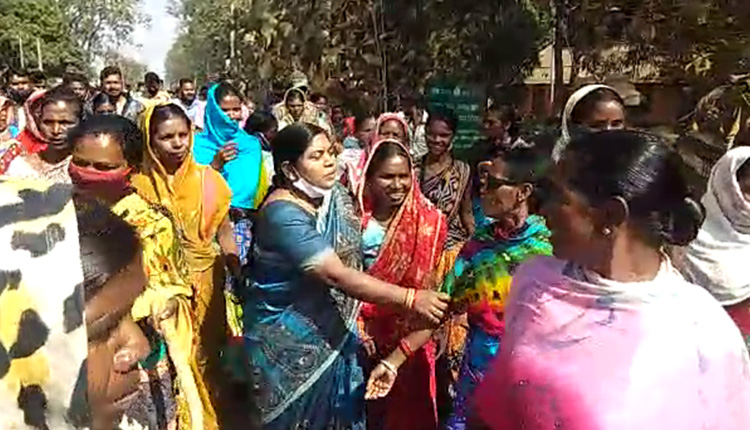 Baripada: MLA Basanti Hembram from Karanjia on Friday faced the ire of a group of local residents in her constituency who reportedly forced her to walk for about 7 kilometres over wild elephant menace.

The Biju Janata Dal (BJD) legislator was taken to the village of the residents where they showed her the damages of crops and houses caused by the pachyderms who have been wreaking havoc in Dudhiani forest range under Karanjia forest division since a month.

As per reports, the locals of Kada Modaka near Karanjia in Mayurbhanj had blocked National Highway-220 demanding compensation for damages incurred by the wild tuskers.

Namita Nayak, a protesting woman said, “We have blocked the road over the apathy of Forest Department towards our plight. A herd of 20 elephants have been destroying our crops, vegetations and homes since one month, but the forest department has turned a deaf ear on our complaints.”

Another local alleged that they are yet to receive the compensation that was promised to them two years back when similar incident had happened.

“We have voted her to win from our constituency. It is her duty to address our genuine concerns. That is why we made her to walk with us to show the damage in our village.,” he added.

When the protest was underway, the agitators spotted the local MLA Hembram who was passing through the area in her carcade. The irate locals reportedly made her get down from her vehicle and walked her for seven kilometers to their village to show her the damages to their crops and houses.

The locals alleged that the forest Ranger never addressed their concern regarding the elephants. Rather, the officer misbehaved with the villagers who approached him to complain about the tuskers.

Sources said, not only the MLA, but the local Ranger, Saroj Panda and the ACF, Diganta Shovan Pal were also made to walk to their village.

Reacting to the allegations of the villagers, ACF, Pal said, “We are continuously trying to ward off the elephants from the area and the accusations of misbehaviour by the Ranger is not true.”

“The locals are evidently unhappy over the elephants, so they made us to walk to see the condition of their village,” Pal added.

Meanwhile, Hembram refuted the claims that villagers forced her to walk and said she walked with the protestors voluntarily to show solidarity with them. “If I wanted to move ahead towards my destination in my vehicle, I would have. But I decided to walk with the people of my constituency,” she said.

It is worth mentioning here that, a herd of elephants from Jharkhand are continuously wreaking havoc in several areas of Mayurbhanj since five months, injuring many and at times killing people too.

A man was killed by a tusker in last July in Keonjhara village under Jashipur block. Similarly, a man from Batagouda village under Badagaon Panchayat was seriously injured in a reported tusker attack in last October.