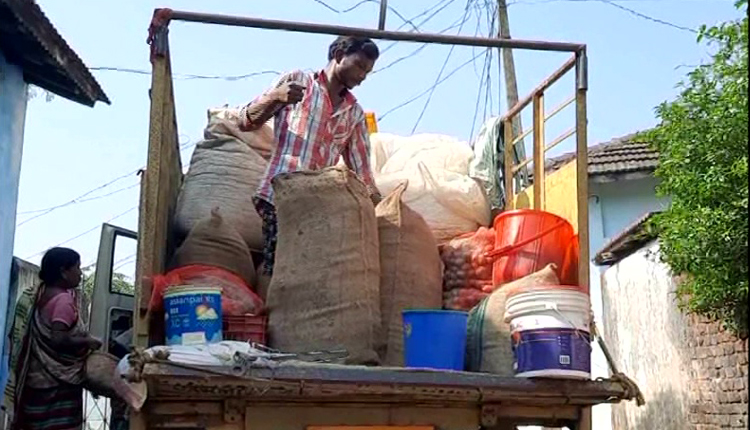 Keonjhar: The alleged mismanagement in paddy procurement in Odisha is certainly disconcerting but the issue has forced the locals of Telkoi in Keonjhar district to resort to the age-old practice of barter system.

A common sighting in the Golabandha village of Telkoi block is a mini truck carrying vegetables and groceries to sell it to the customers, but the intriguing part is that, he accepts paddy instead of money and barters it for vegetables.

Ramesh, a local of Chhendipada in Angul district has adopted the old system of commodity exchange quite successfully and seems quite content in doing business in the rural areas, where paddy is available in abundance.

As far as the locals are concerned, they do not find any problems with it. With mandis being far away from their farm lands and the high transport cost associated with it, the new form of trade has come in handy for people in the area, especially small-time farmers.

Pramila Biswal, a local of Golabandha said, “They sell puffed rice, rice flakes and almost all the vegetables. The shop keepers here do not accept paddy, so with an option for barter system, Ramesh is eagerly awaited here by almost all households.”

Similarly, Manjulata Biswal, another local of the village said, “I love puffed rice, but nobody is selling that now a days. But Ramesh makes sure he brings puffed rice to our doorstep in exchange of paddy.

The distress sell had even made many such farmers to stock up their produce hoping to sell it in the future at a reasonable rate. And the mini truck with Ramesh has provided them an opportunity to sell their produce in return of daily essentials, creating a win-win situation for both, the seller and the buyer.

“I started locally from Chhendipada and now moving around for business. The response of people is great but limited to only rural areas. People in urban areas pay in currency, which will not fetch any profits in my model of business,” said Ramesh.

However, local intellectuals like, Jenamani Pradhan suggests, locals are actually forced for bartering, because they cannot sell their paddy in the mandi. “We have only 15-20 people who take their produce to mandis. Others sell to middle men in a very low price. Even after that, a lot of paddy remains with them as stock, which they are happy to barter with Ramesh,” said Pradhan.