Fans of the couples have been flooding Ayesha’s social media accounts with hate messages and even trolling her for ruining Sania and Shoaib’s martial bliss.

Pakistani actress Ayesha Omar has been in news lately for her alleged relationship with cricketer and Sania Mirza’s husband Shoaib Malik.

Speculations are rife that Ayesha is the cause of trouble in the sports power couple’s martial life. The model and actress has finally opened up about her alleged relationship with Shoaib.

Reports suggested that Shoaib Malik is having an extra-marital affair with Ayesha . Reportedly, they came close to each other during a bold photoshoot for a magazine.

Following the same, fans and well-wishers of the couples have been flooding Ayesha’s social media accounts with hate messages and even trolling her for ruining Sania and Shoaib’s martial bliss.

While Ayesha refrained from commenting and ignored the hate she was receiving on social media at first, now a viral screenshot has surfaced on the internet in which Ayesha is seen replying to a troll and clarifying about her relationship with Shoaib. 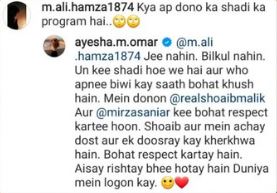 In the viral screenshot, Ayesha can be responding to a user when he asked Ayesha if she is getting married to Shoaib.

Reacting to this, the actress replied, "He is happily married and I respect the couple. I and Shoaib are good friends and well-wishers, these types of relationships also exist in the world.”

According to reports, Sania Mirza and Shoaib Malik are living separately and co-parenting their son Izhaan.

They got married in 2009 and since then they have been living in Dubai. However, there is no official confirmation from the couple about their divorce. Besides, the couple shocked the public when they announced a new show together, leaving fans confused.