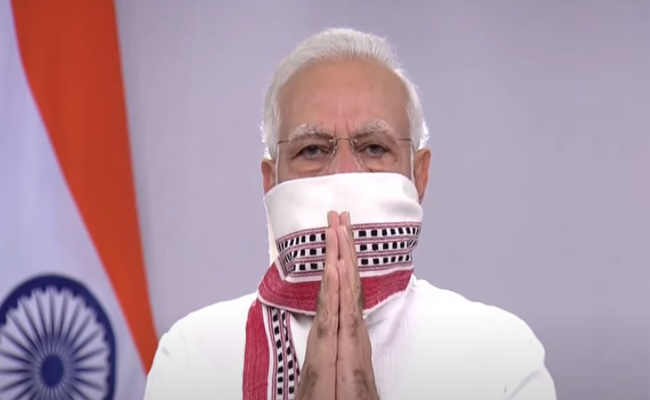 New Delhi: An astounding 93.5 per cent people in the country believe that the Prime Minister Narendra Modi-led government is handling the coronavirus outbreak effectively, a survey revealed on Thursday. The central government had imposed a 21-day nation-wide lockdown on March 25, which was later extended till May 3.

According to the IANS-C-voter Covid-19 tracker, the number of people who laid trust on the Modi government on the first day of the lockdown was 76.8 but that has now increased to 93.5 per cent as of April 21.

In the survey, the statement — “I think the Indian government is handling the coronavirus (outbreak) well” — was put forth before people between March 16 to April 21 and their answers were sought.

On April 16, 75.8 percent people said that they have faith in the government, but the percentage increased after the stringent curbs were imposed in the country.

Interestingly, overall confidence in the incumbent government saw a sharp rise on April 1. An 89.9 percent people believed that the government is working well in comparison to March 31, when the percentage was 79.4.

The Index of Preparedness has gone up sharply in the past one month, the Index of Complacency has gone down while the faith in the government’s efforts to tackle coronavirus pandemic remains not only solid throughout but the approval ratings continue to surge, as per the IANS-CVoter COVID Tracker 2020.

According to the tracker conducted from March 16-April 20, the number of people planning ahead, captured by the Index of Preparedness is going ahead by stocking up more rations and medicines or keeping aside money to purchase them.

As many as 42.9 per cent respondents in the survey, as of April 20, have stocked up on rations and medicines for more than 3 weeks while those with less than 2 weeks is still higher at 56.9 per cent. However, the number of people who have made preparations for less than a week is only 12.1 per cent. The survey had a sample size of 4,718 persons.

The number of people who had less than three weeks ration on March 16 was 90 per cent and almost nobody had ration beyond three weeks. This number has been going up every day especially around the time the lockdowns were announced in April.

On the Index of Panic, the readings show that as of April 20, 41.1 per cent respondents agree that they or someone in their family can catch the coronavirus. A large number at 56.3 per cent still disagree that they can get the virus. At the beginning of the survey only 35.1 percent people thought they could get the virus. This number has risen but has stabilized around the early 40s range.

The most consistent reading in the tracker has come on the Trust in the Government index. A vast majority of Indians, 93.6 percent feel that the government is handling the coronavirus crisis well while only 4.7 per cent disagree.

The approval ratings were 75.8 per cent at the start of the survey and since then the number of people who disagree has only been going down showing the immense faith in the handling of the crisis by Prime Minister Narendra Modi and his government.

The Index of Complacency has also come down as 54.1 per cent people disagree with the proposition that the threat from coronavirus is exaggerated while 37.8 agree, as per the latest readings on April 20.

Those who agreed with the perception that the threat was exaggerated was much higher on March 16 at 53.6 per cent and this number has consistently been going down as awareness levels have gone up.