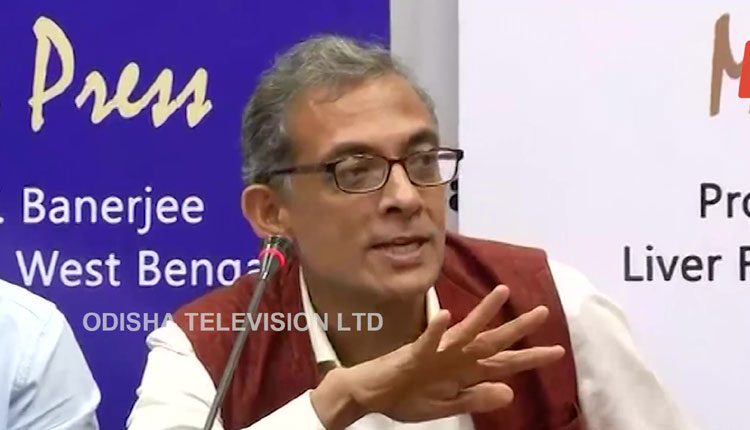 Kolkata: Nobel laureate and economist Abhijit Vinayak Banerjee has suggested re-introduction of the wealth tax, and said the government should give priority to re-financing the banking sector and improve infrastructure, while lauding the NDA regime’s commitment to a host of welfare measures.

“Given the amount of inequality we now have, a wealth tax is completely sensible. In general, more redistribution makes perfect sense to me,” Banerjee said at the epilogue session of the Tata Steel Kolkata Literary Meet here on Monday evening.

However, Banerjee said he did not expect wealth tax to be introduced right now.

“Do I expect it to happen right now? I suspect not. All the vibes I hear are about tax cuts for the middle classes. I really think that’s not where the leverage points are,” he said.

A year after coming to office, the Narendra Modi government abolished the wealth tax in 2015 on account of a high cost of collections and a low yield.

Banerjee, who won the Nobel prize in Economics with fellow economists Esther Duflo (Banerjee’s wife) and Michael Kreme, said he was less worried about budget deficit and commented: “It (deficit) has never been what it claims to be”.

The Ford Foundation International Professor of Economics at the Massachusetts Institute of Technology did not agree that the union government led by Prime Minister Narendra Modi wasn’t “doing anything for the poor”.

“This government roughly has been as welfarist as the previous government. It advertises itself as a free-market government, but It has brought very expensive new welfare schemes. This government has been committed to a host of welfare undertakings,” he said.

Banerjee conceded that the NDA government has cut back in some of the areas, but said it was “not surprising” as the budget was not in good shape.

“But it has not been particularly cheap on welfare schemes,” he said, referring to the (Pradhan Mantri) Ujjwala Yojana, Swachha Bharat and Ayushman Bharat. “So it is not that they aren’t doing anything for the poor”.

Asked to spell out the priority for the government he said: “We must find the money to refinance the banking sector, which is in deep doldrums and will take a long time to revive, if no money is put in from outside.”

“We also need to improve infrastructure. Those are the two priorities, I wish they don’t come up with giveaways to the corporate sector”.

On narrowing the rich-poor gap, he said: “Our first reaction to our economic problem, that looked very much like a Keynesian demand slowdown, was to cut corporate taxes. To me, it is a time warp. We don’t see where we are.”

“The corporate sector is sitting on cash, and not doing much with it. And that’s because there is no demand. Somehow we have a mindset of making policies which are based on some models of economics where all the dynamism is provided by the rich.

“But it doesn’t seem to be true. I think there are obvious things we could do differently,” he added.

Coronavirus: 3 Under Isolation In Delhi Hospital