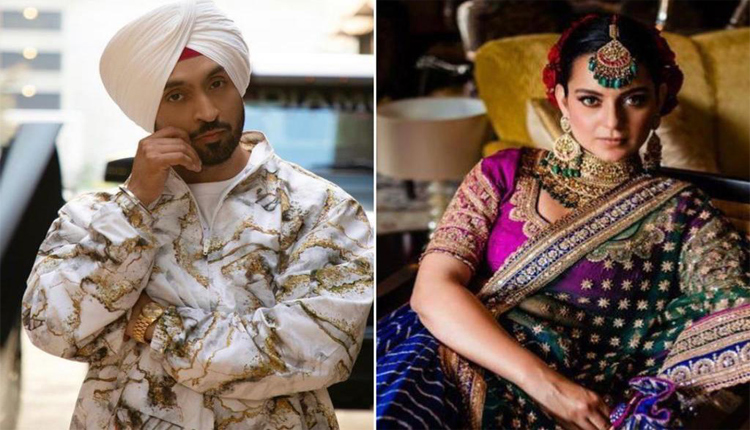 Kangana Ranaut is yet again caught up in the middle of a controversy. The actress had earlier shared some information on Twitter drawing flack from many celebrities including Diljit Dosanjh who termed it as false. This was followed by Kangana and Diljit engaging in a virtual war of words.

Even the netizens felt the heat of the fight when the two of them were slamming each other and the Queen actress went on to call the latter ‘Karan’s paltu’.

Diljit Dosanjh had called out Kangana Ranaut about her tweet on farmers’ protests, leading to a Twitter war between the two actors. It all started when Kangana Ranaut had allegedly tweeted false information about an elderly Sikh woman, saying that she is protesting to earn a sum of Rs 100. Kangana had also claimed that the same woman was the Shaheen Bagh Dadi, Bilkis Bano. The now-deleted tweet angered many celebrities including Diljit Dosanjh.

Clarifying Kangana’s tweet which alleged that the Shaheen Bagh Daddi, Bilkis had joined farmer protests for Rs.100, Diljit had shared a video interview of the elderly woman. The woman’s name is Mahinder Kaur, and she has been a part of the farmers’ protests. In the video interview by BBC, she can be seen addressing Kangana Ranaut, asking her to come and see for herself how farmers work.

Diljit shared the video interview on Twitter and wrote in Punjabi, ‘Listen to this Kangana, with proof. A person should not be this blind. She (Kangana) keeps on saying anything.’

However, the actress hit back at Diljit by calling him Karan’s paltu and wrote in Hindi that ‘The dadi who was protesting at Shaheen Bagh for citizenship, that same Bilkis Bano dadi ji was also seen protesting for farmers. I don’t know who is Mahinder Kaur Ji. What is this drama?’

Replying to the ‘paltu’ jibe, Diljit wrote in Punjabi, ‘Are you a pet of whoever you have worked with? The list will be long then. This isn’t Bollywood, this is Punjab. You know how to play with people’s emotions.’

Hitting back to Diljit’s tweet, Kangana then wrote in Hindi, ‘Oh come on you bootlicker, the ones you butter up to get work, I teach them lessons every day. Don’t get too excited. I am Kangana Ranaut, not a bootlicker like you who will lie, I only commented on Shaheen Bagh protester’

Slamming the actress again, Diljit, ‘Our mothers are equivalent to god for us. You have stirred up a hornet’s nest. Google the Punjabi.’