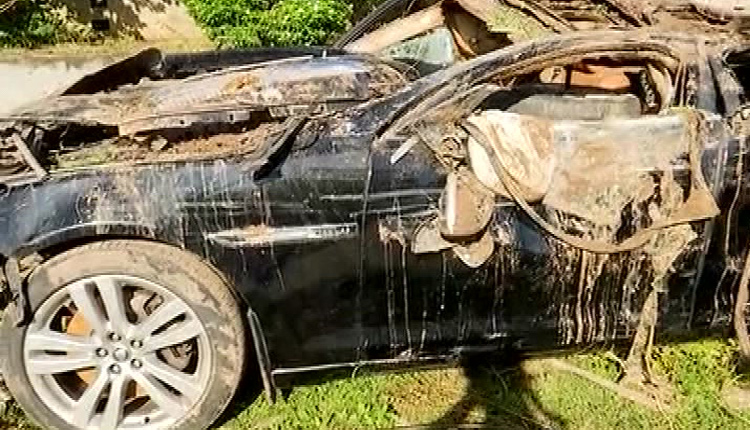 Bhubaneswar: Statistics reveal that each year about a million people die and million others sustain grievous injuries in car crashes, irrespective of whether the vehicle is equipped with modern defensive features or no. Even the rich luxurious cars with high accident safety features cannot guarantee you your life, and this has been proven in the deadly mishap that occurred on the NH-16 near Telengapentha in Cuttack on Friday night.

31-year-old Ankur Pradhan, son of the former Sambalpur MP Amar Pradhan, along with two of his friends Gautam and Parmeet, was returning to Bhubaneswar from Cuttack in a Jaguar XF late last night at around 2 am, when the vehicle lost its control, hit a roadside tree and fell into a canal. The freak accident captured in a CCTV camera purportedly shows that it was a result of high-speed driving.

The impact was so severe that despite inflation of the airbags deployed to provide a cushion and help reduce the damage to the body during accidents, not a single life could be saved. The airbags reportedly burst during the crash, sources said.

Life has dealt the former MP some cruel blows – Amar Pradhan had lost his wife Mausumi some years back in a car accident, and now his only son Ankur passed away in a similar mishap. Ankur’s death has left his father lonely forever.

The ex-MP’s son had recently got engaged and was set to marry in a few days. Death of Ankur and his friends is extremely saddening, expressed Ankur’s uncle Prabhas Pradhan.

Narayan Jena, an eyewitness said, “Maybe because it was being driven at a very high speed, the driver could not take the vehicle in the correct direction. Subsequently, they lost their way and collided with a tree and then fell into a roadside canal. The shattered glasses and the mangled pieces of the luxury car speak volumes about the intensity of the accident.”

Meanwhile, police have registered a case and initiated an inquiry. Speaking on the incident, Cuttack DCP Prateek Singh stated, “The vehicle was completely damaged. It took some time to extract the persons trapped inside the car. One flaw that is apparent is that the overspeeding of the vehicle is one of the factors.” All three were rushed to the SCB Medical College and Hospital where the doctors declared them as brought dead.

Even though such expensive cars are equipped with airbags, no safety innovation seems a solution to reduce fatalities which occur mainly due to rash driving and overspeeding of vehicles. “The car dashboard will fire an air balloon during collisions but if the vehicle is exceeding 100 km/hr speed limit, then airbags don’t function the way they should. Such luxury vehicles also need proper roads, which was not the case here,” said an expert.

In a very similar accident which took place on the Puri-Konark marine drive in 2018, a person lost his life and three others were injured after a suspected drag race between a BMW and an Audi. Both the vehicles were being driven by two friends who had gone to celebrate a friend’s birthday. Police later confirmed that the accident was a result of high-speed racing amid dense foggy conditions in the wee hours.

The message is loud and clear – Love your car(s), but love your life even more.