Column: To Reveal Or Not To Reveal! 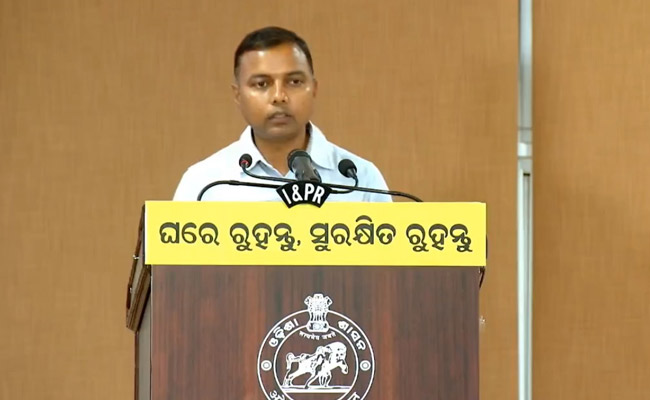 Poor Pradipta Dalabehera! He must be feeling cheated at earning the ‘dubious distinction’ of being the only person in the state named as having tested positive for the deadly n-Corona virus. While revealing not just his name but other crucial details like his plot number and the area he lived in on Thursday, Bhubaneswar Municipal Commissioner (BMC) Commissioner Premchand Choudhury said the decision to name him was taken after weighing respect for privacy of an individual against the ‘larger public interest’, which he said necessitated the revelation. An exception to the general principle of keeping the victim’s identity under wraps was made in Dalabehera’s case, he explained, because he had ‘no history of travel to foreign countries or even to other states in the country in the recent past’. The revelation was followed almost immediately by the ‘sealing’ of the whole Suryanagar area due to fears that this could have marked the beginning of the dangerous ‘community transmission’ phase!

Just 48 hours later, the same Mr Choudhury told the media, without so much as batting an eyelid, that though Dalabehera himself did not have any history of travel outside the state, a member of his family, who has also tested positive for the virus, did travel to Kolkata recently! Of course, it would be wrong to blame the BMC Commissioner for the faux pas because he is too junior in the hierarchy to have taken the call entirely on himself. The decision to make an exception and rescind its own well laid out policy to make an exception in such a sensitive case must have been taken at the highest quarters by people who are supposedly leading the ‘War on Corona’ on behalf of the state government. But at the same time, can we blame Dalabehera if he is feeling aggrieved in his hospital at being made a public spectacle of and dreading the prospect of returning to his place even after he is fully cured (May God save him!). Is he not well within his rights to sue the authorities for violating his ‘right o privacy’?

Irrespective of who took the call, however, the whole sorry episode has thrown up several questions that must be answered by the authorities. Why did the BMC – and by implication the state government – jump the gun and emphatically announced that Dalabehera had no recent history of travel outside the state and then followed it up by spreading panic in the whole area by sealing off Suryanagar from all sides? Why could it not wait a little longer to find out if anyone else in his family may have gone outside in the recent past? Now that it has been confirmed that it was no different from any of the previous cases detected and was not a case of community transmission as initially suspected, will it spare the people living in Suryanagar the hardships by lifting the sealing right away and apologizing to Dalabehera for having breached his privacy?

I remember having questioned the logic behind the decision to name Dalabehera in a social media post barely minutes after it was announced by Mr Choudhury on TV on Thursday. There was a flurry of comments from friends, who jumped to the government’s defence and ‘explained’ why it was necessary. Almost all of them cited the same reason Mr Choudhury himself had cited to justify the decision: the fact that Dalabehera’s case was unlike the other cases in that he did not travel out, making ‘contact tracing’ difficult in his case. But somehow, I was not convinced and kept protesting, though feebly, why someone with a history of recent travel outside is less dangerous. The answers that I got did nothing to clear my confusion.

But I realized my query was not misplaced when the state government announced a complete 48-hour shutdown in the entire Bhubaneswar city, besides Bhadrak and Cuttack, around noon on Friday. It was done, we were told after Corona positive cases were detected at all these places. “Why is the whole bustling city of Cuttack being brought to a complete shutdown after detection of just one case – and that too of a person who was found to have attended the Tableeghi Jamaat religious gathering in Delhi’s Nizamuddin? What happened to the logic of outside travel that was used by the government and many others to explain away the withholding the identity of other victims?” I wondered.

I felt further vindicated when the authorities announced sealing of the whole Bomikhal area in the Capital city late on Friday night after three positive cases were detected there. If Suryanagar was sealed and Dalabehera’s name made public, why were the identities of the three from Bomikhal who had tested positive being kept away from the public? The BMC Commissioner revealed late on Saturday evening that the father of the three persons, who are brothers, had travelled to Bhopal. In that case, why were the people of Bomikhal put to untold miseries by sealing off the whole area? Where, I wondered, was the need to seal the area when the whole city was under an unprecedented 48-hour shutdown anyway?

In fact, the whole argument that ‘contact racing’ is child’s play in case of those with recent history of travel outside the state was hit for a six by the Jajpur Collector, who revealed on Saturday that the person identified as a Corona positive case in Brahmabarada, a Maulvi, was not at all cooperating by revealing the identities of all those he had come in contact with since returning from the Markaz on March 18? He stopped just short of accusing the Maulvi of lying, but made it clear that it was difficult to believe that the Maulvi had come in contact with just 13 people in the meanwhile! This was what I apprehended from the very beginning. While contact tracing, do the authorities have any means of finding out the total number of people someone has come in contact with except to take his word at face value? What if s/he, like the Maulvi in Jajpur, lies and decides to take the authorities on a wild goose chase? The whole logic used to justify the withholding of names of those with recent history of travel outside Odisha thus fall flat on its face!

I am no expert on Corona or privacy laws. But the little that I have read on how the rest of the world is tackling the Corona menace suggests there are no universally accepted norms about the desirability of revealing identities and each country – and even each state – has been left free to take a call that it deems fit. The Odisha government too used precisely this leverage to reveal the name in one case while hiding it in the case of all others. Even in a country with very strong privacy laws like US, healthcare authorities have been given the freedom to decide on it after weighing individual privacy and greater public interest. But in a country like India where there is a general reluctance to come out into the open and offer themselves to be tested, quarantined and treated by those who have reasons to suspect they may be carrying the virus – and not be honest about it even when identified, as in the Maulvi’s case in Jajpur – the greater public good has to override the right to privacy of an individual because failure to do so could prove disastrous for the country as a whole. If the government, in its wisdom, decides to go by the Supreme Court ruling that right to privacy is a fundamental right under the Constitution, it should be applied uniformly in all cases without any exceptions whatsoever. Pick and choose will simply not do.

On balance, therefore, I am of the firm view that there is a strong case for revealing the names of ALL those who test positive, irrespective of their recent travel history, to save others who might have come in contact with such a person unknowingly.

COVID-19 In India: Coronavirus Outbreak And Control Measures Till April 4